CRC Press is pleased to share with you our author Q&A session with John Lentini, author of Scientific Protocols for Fire Investigation, Third Edition 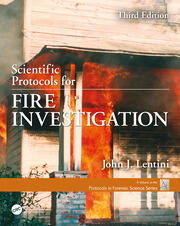 Congratulations on the publication of the third edition of your book Scientific Protocols for Fire Investigation. What would you like your audience to take away from the book?
What I want the audience to take away from this book depends on who the audience is. I hope everyone appreciates that fire investigation is a complex and difficult undertaking, which requires more than just a superficial understanding of chemistry, physics, fire dynamics, and documentation. The book relies heavily on the two standards that govern the operation of fire investigation: NFPA 1033, Standard For Professional Qualifications For Fire Investigator, and NFPA 921, Guide for Fire and Explosion Investigations. The intended audience is both people who want to conduct fire investigations and reach correct determinations, and people who need information on how to vet fire investigators and evaluate their work product.
What inspired you to write this book?

I was inspired to write a book by Norah Rudin and Keith Inman who wrote Principles and Practices of Criminalistics: The Profession of Forensic Science back in 2000. I very much enjoyed their work and their approach to forensic science and thought that a volume on fire investigation would fit well into their proposed framework. Norah and Keith agreed to be my editors and were a big help with the first edition. It turns out that Scientific Protocols for Fire Investigation is the only book in the series that has gone beyond one edition, but that doesn't change the initial inspiration. I was also inspired by my acquisitions editor, Becky McMaster (now Becky McEldowney) who initially proposed putting eight color pages in the center of the book, but was bold enough to ask if people would be willing to pay extra for a book in full color. Scientific Protocols was the first fire investigation book to be printed 100% in color, and I have been very pleased to see that just about every fire investigation text written since has followed my example.

Why is your book relevant to Arson & Fire Investigation in the present day?
Fire investigation is a rapidly changing field. Although the behavior of fire has not changed terribly much, our understanding of it has. There have been some changes in the nature of our built environment and the fuels that we put inside it, and it is this changing environment and fuel mixture that resulted in so much confusion in the 70s and 80s. These days, we are studying ventilation as the main driving force for the production of post-fire artifacts, and the current edition delves deeply into the effects of ventilation.
How do you think the field of Arson & Fire Investigation is evolving today?
The field is evolving today as older fire investigators reach the end of their careers, and the vast majority of practitioners understand the need for standardization and certification. The need for accreditation of fire investigation organizations will become clear in good time. Current practitioners also understand that the field has evolved from a mixture of art and science to a mixture of science and expertise. Investigators who refuse to learn the scientific fundamentals are gradually being persuaded to find another line of work.
What are the main developments in research that you’re seeing in Arson & Fire Investigation? How does your book relate to these recent developments?

A the major developments that are occurring today are happening in full scale experiments being conducted by the Bureau of ATF Fire Research Laboratory and Underwriters Laboratories Fire Safety Research Institute. The ATF laboratory, in particular, has data from thousands of test fires and it would be a wonderful thing if they could be persuaded to anonymize and release that data.
Everything about the book is focused on the chemical nature of what happens in a fire, including the interactions at the molecular level between fuels and oxygen. The Third edition has new drawings to make these molecular interactions more accessible and more understandable.
What audience did you have in mind whilst writing you book?
The audience I had in mind while writing the book was a dual audience. The most important audience is fire investigators who need the basic science in order to understand what they're doing. The secondary audience is those who hire and fire investigators, or litigators who are tasked with challenging the conclusions reached by fire investigators.
What makes your book stand out from its competitors?
What makes this book different from other fire investigation books is that it contains actual instructions on how to do the job. Other texts may provide the underlying science, but offer little guidance on what to do on a fire scene when confronted with actual evidence, or what to do in a conference room when being confronted with a serious challenge.
Is there one piece of research included in the book which surprised you or challenged your previous understanding of the topic?
I have been surprised many times over the last 40 years when I learned something new about fire investigation. Most of those revelations are covered in the book. Over the last 10 years, publications about the effects of ventilation on fire pattern production, and the potential for misinterpreting those patterns have been widely published. The most surprising single result is shown on page 73 at Figure 3.13, where the temperature of a test fire changes in almost perfect lockstep with the oxygen concentration in the room. The same section of the book also describes a change in the 2017 edition of NFPA 921. There is a drawing that had been in the previous eight editions that the Technical Committee found it necessary to change as a result of realizing the importance of oxygen depletion. (Figure 3.14)

What is innovative about your research?
What is innovative about my research is that most of it arises out of cases where it was necessary to challenge some conventional wisdom. Until I worked on the Marvin Clark case, nobody knew how to tell the difference between artifacts left behind by burning shingles, and ignitable liquid residue from kerosene or diesel fuel. Figuring that puzzle out is one of the accomplishments that I am proudest of. [“Differentiation of Asphalt and Smoke Condensates from Liquid Petroleum Distillates Using GC/MS,” J. Forensic Sciences, Vol. 43, No. 1, January 1998.] My work on identifying petroleum products in the everyday background was innovative simply because nobody had made that compilation before. It was useful because during the 1980s, fire debris analysts got better and better at detecting smaller and smaller quantities of ignitable liquid residues. “The Petroleum-Based Background”  helped put those findings of traces of petroleum into proper perspective. [“The Petroleum-Laced Background,” (co-authored with Julia Dolan and Cheryl Cherry),  J. Forensic Sciences, Vol. 45, No. 5, September 2000.]
Probably my most innovative research was conducted after the Oakland California wildfire of 1991. The destruction of 3000 homes was a tragedy, but I saw in that tragedy the potential to learn what should be expected in residential fires that have burned all the way down. Until that time, there were many artifacts found in fully consumed structures that were wrongly interpreted as evidence of arson. This work did not endear me to the vast majority of practitioners, but these days, the work that happened after Oakland much more widely appreciated. [“Baseline Characteristics of Residential Structures Which Have Burned to Completion: The Oakland Experience,” (co-authored with David M. Smith, C.F.I. and Dr. Richard W. Henderson, C.F.I.), Fire Technology, Vol. 28, No. 3, August 1992.]
Who has influenced you the most?
Early on, my colleagues at Applied Technical Services, who had knowledge and skills that were different from mine helped me to integrate my work into a general scientific framework. The most influential people, however, have been colleagues that I worked with in order to develop standards. Standards development is not for everyone, and reaching a consensus in areas as disparate as those occurring fire investigation is a very difficult undertaking, requiring input from many different disciplines.
What first attracted you to your current field as an area of study?
As a young man, I was a chemist in the Georgia State crime laboratory and interacted frequently with state fire marshals, most of whom had zero scientific training. It was by interacting with these individuals that I learned that fire investigation was badly in need of an infusion of people with scientific training or at least a scientific way of thinking. Bringing that perspective to training seminars and seeing how much criticism that generated made me want to work even harder to bring more science into the discipline.
What advice would you give to an aspiring researcher in your field?
I would say to get grounded in chemistry and physics, as opposed to criminal justice. It is not difficult to turn a scientist into a law enforcement officer, but turning a law enforcement officer into a scientist can be more challenging. Alternatively, studying fire protection engineering is excellent preparation for a career in forensic fire investigation.
What do you feel has been a highlight for you, in your career?
Helping the people listed in the dedication of the book is the highlight of my career. There are several people who spent decades wrongly imprisoned that I have been able to assist and actually get them out of jail. Correcting a miscarriage of justice is one of the highest callings that a forensic scientist can have.
?
?