Congratulations to Martin Davis, being named as CRC Press's Mathematician of the month for August 2018!

CRC Press is pleased to share with you our author Q&A session with Martin Davis, author of The Universal Computer: The Road from Leibniz to Turing, Third Edition.

A distinguished prize-winning logician, Martin Davis has had a long career of more than six decades devoted to the important interface between logic and computer science. Born in New York City, he received his Ph.D. from Princeton University in 1950. He spent thirty years at New York University, where he helped found the computer science department. His expertise, combined with his genuine love of the subject and excellent storytelling, make him the perfect person to tell this story. Professor Davis is currently Professor Emeritus at New York University and now lives with his wife of 66 years in Berkeley, California. 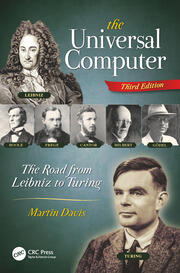 Congratulations on the publication of your book, The Universal Computer: The Road from Leibniz to Turing, Third Edition and being named Mathematician of the Month! What do you want your audience to take away from the book? It is my hope that my readers will have a better sense of what goes on inside their computer whether it is a desktop, a laptop, a tablet, or a phone. I hope they will not only enjoy the stories I tell about the lives and work of the gifted thinkers who helped develop the logical concepts on which computers are based, but also come to understand some of these concepts.

What inspired you to write this book?
I had come to realize the extent to which Alan Turing’s ideas played a pivotal role in the development of modern computers before this had been acknowledged by most scholars writing about the history of computers. I wanted to bring this understanding to the attention of the wider public. For this reason, I have tried to write about technical mathematical ideas in such a way that even those with little mathematical education could readily understand them.

The previous edition came out in 2011, what are the main differences between that edition and the new third edition?
The section on artificial intelligence is brought up to date with a discussion of so called “deep learning’’ and its use in enabling a computer to defeat master players of the ancient Chinese game of Go.  There is information about Georg Cantor, one of the seven thinkers whose stories are told in the book, that contradicts what a reputed expert has written. There is a discussion of some of the research being carried out in the US, in Princeton, complementary to what Turing was doing at the same time in Cambridge, England.

What audience did you have in mind whilst writing you book?
I like to think that the fascinating story I tell would be interesting to everybody who enjoys thinking.

What makes your book stand out from its competitors?
There are no competitors.

What did you enjoy about writing the book?
I have always enjoyed explaining things in a way that makes them easy to understand.

What is your academic background?
My undergraduate education was at City College in New York. My doctoral studies were at Princeton University.

What is innovative about your research?
I was one of the first to work on the foundations of computer science.

Who has influenced you the most?
Professor E.L. Post at City College.

What do you think are your most significant research accomplishments?
The work I did in connection with the tenth problem in a famous list proposed by David Hilbert (one of the seven thinkers whose stories are told in this book) in 1900.

What do you feel has been a highlight for you, in your career?
The solution of Hilbert’s 10th Problem.

What is the last book you read (non-academic)?
Pamela Druckerman, There Are No Grown-ups 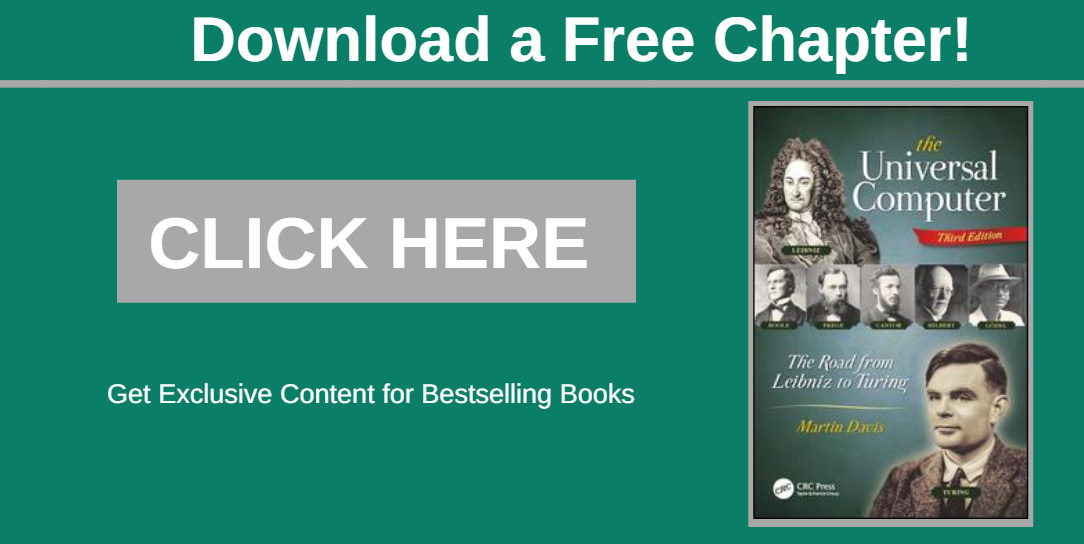 The Universal Computer: The Road from Leibniz to Turing has received great reviews:

"The first edition of this book was one of the first to offer a serious study of the historical connections between logic and modern computing. It situates the development of the first computers within a scientific rather than a technological history: it tells the story of the life and work of a number of well-known logicians and how these established, in retrospect, part of the theoretical foundations of the modern computer. This third edition contains extensions and corrections of the first and second editions, including the addition of an Appendix on Cantor and Kronecker, correcting a dominant historical narrative in which both actors are played out against each other; a discussion of the advances that have been made with so-called deep learning techniques and a further extension of the chapter on Gödel.

The book is highly accessible and engaging. It explains several basic mathematical and logical notions in an exceptionally clear and comprehensive manner. These are developed throughout the different stories of the people behind those notions. Moreover, it is against the background of this history of logical ideas, that Martin Davis enters into a more philosophical discussion with respect to advances in AI and so-called deep learning in the final chapter of the book. This book is thus a must-read not just for anyone who is willing to gain a better understanding of some of the basic logical principles behind our contemporary computing devices but also for those scholars who want to engage more deeply with the basic question of the connection between the history of computer science and its relation to logic and foundations of mathematics."

"This book about computers is like no other. It is now in a 2018 edition, after a first publication in 2000. The update reflects some recent developments, for example the recent success of champion-beating computer Go playing. But the main purpose of this book is to describe all possible developments — past, present and future. It is about the core property of the computer, that makes it possible for a single machine to switch between Go-playing, facial recognition, displaying webpages and searching for extra-terrestrial life — and infinitely more. This is the universal nature of the computer, which every application now takes for granted.

Thought rooted far back in the scientific revolution, the book focuses on the extraordinary discoveries of the 1930s and 1940s, when the concept of the universal machine emerged. This discovery, arising out of the purest research in mathematics, might be compared with the elucidation of atomic fission and DNA structure — dependent on highly non-obvious detail yet transforming the world. The Universal Computer springs from one of the very few people who after a long life can speak first-hand of how this transforming concept arose, with an authoritative account of the essential features. Martin Davis was himself a major contributor to the mathematical theory of computing and in at the beginning of the first electronic computers.

For the more specialist reader, this book offers a pugnacious assertion of a computational philosophy of mind, and makes a contribution to the history of science which asserts the primacy of mathematical and logical ideas over engineering implementation. The more general reader will find Martin Davis an expert story-teller. He conveys the magic of the pioneer period, and he places it within a broad picture of human history and of its individual contributors. Foremost is the fascinating figure of Alan Turing, who first defined the universal machine concept, but who also set out the prospects for Artificial Intelligence. As Martin Davis mentions, Turing’s discussion of the potential of computers for chess-playing began in 1941, and the deep questions about mind and machine, as are so often argued about today, were well aired from the start. Computers are now cheaper and faster than the pioneers could dream of. They are physically smaller, yet huger in storage capacity. But their underlying principle has not changed. Unlike other computer books, this one will not become out of date."

"Next year, Martin Davis will turn 90 years old. A legendary figure in mathematical logic, he is best known for resolving Hilbert’s Tenth Problem, together with Yuri Matiyasevich, Hilary Putnam, and Julia Robinson. Davis also did some of the world’s first computer programming, working in the 1950s on the ORDVAC computer, which had a central memory consisting of 40 vacuum tubes. A master expositor, Davis received the AMS Steele Prize for Exposition as well as the Chauvenet and Ford Prizes of the Mathematical Association of America. His popular book The Universal Computer originally appeared to wide acclaim in 2000 and was re-issued in 2012, in a special edition to honor the centenary of Alan Turing. The tale of how computers developed has been told many times and in many forms—and often with heavy emphasis on the computer as an engineering feat. Davis takes a completely different tack by tracing the origin of computers in developments in logic, starting with the ideas of Leibniz, who, as Davis puts it, "dreamed of machines capable of carrying out calculations, freeing the mind for creative thought." After an opening chapter on "Leibniz’s Dream," Davis discusses the lives and work of Boole, Frege, Cantor, Hilbert, Gödel, and Turing. The book closes with a discussion of the first computers that were built as well as a look towards the future. "When a distinguished expert offers a popular exposition of his subject, we greet the effort with keen anticipation," wrote Brian Blank in a review that appeared in the May 2001 issue of the Notices. "That is all the more true when the writer is as skilled as Martin Davis. It is a pleasure to report that in this case our anticipation is richly rewarded."