We are pleased to share with you our author Q&A session with Warren Berger & John Berger! Authors of Case Close! Neuroanatomy, Warren and John talk about their title and what makes it stand out from its competitors, which is available for purchase here. 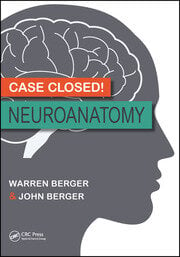 1. Congratulations on the publication of your book, Case Closed!  Neuroanatomy.  What lead you to writing it?

Warren: It was a frustration about the lack of quality neuroanatomy books available for beginning studies. Neuroanatomy books typically fall into one of two distinct groups. The first is the more traditional text, usually in excess of 1000 pages that covers every esoteric detail of neuroanatomy, and is designed to be used both for senior neurology residents studying for their board exams, and also first year medical students who are approaching this subject for the first time. The other group is made up of very short books, typically less than 150 pages, which succinctly summarize material but don’t actually teach the reader anything.

After hearing this complaint again and again from medical students, and experiencing it myself when I was learning neuroanatomy, I felt that we had to try to make it more accessible.

2. What are your academic backgrounds?

John: I attended the University of Western Ontario for Psychology and English Literature. Since graduating, I’ve worked in research and curriculum support.

3. What makes your book stand out from its competitors?

Warren: There is a tendency for instructors, and by extension, neuroanatomy books, to want to try to teach neuroanatomy alongside all of the obscure trivia associated with it.  In no other field does this attitude exist – you have to learn basic trigonometry before you learn anything about calculus, for example. Our book has selected only the most practical points about neuroanatomy, and we explore each concept from multiple angles in order to make sure the student learns it, and then can apply it. By doing this, our text comes in at about 350 pages, and is designed to be able to be read fully within two weeks’ time.

John: The visuals in Case Closed! echo the same philosophy. The art was crafted with simplicity in mind so as not to overwhelm the reader with extra detail that we all know exists in real life, but would otherwise muddy the point that is being driven across in that moment.


4. Do you have any events lined up?  Are you attending any conferences?

5. What sparked your interest in neuroanatomy?

Warren: For the majority of medical school, I was actually concerned I had chosen the wrong field of study. I was tired working hard to memorize seemingly unrelated facts, only to have that knowledge replaced by more seemingly unrelated facts.  However, when we arrived at neuroanatomy it reminded me so much of my physics problems. Rather than memory work, once you understood a few key concepts, you could reason out almost any problem. From there, I was hooked.

John: From an artistic perspective, the subject lets you run pretty wild. You have images of anatomy, of nerve paths, of motor movements... It’s a lot of fun to illustrate.

6. Could you explain the concept of “neurophobia”?  How does your book help to alleviate this fear?

Warren: Multiple international studies have examined why medical students have such trepidation about neuroanatomy. They found that neuroanatomy was the poorest developed knowledge base among all medical school subjects. It was approached with such a dislike that the authors decided to name the aversion “neurophobia.” They later found that neurophobia extended well into clinical practice.

It doesn’t need to be this way. Students are intimidated by a myriad of esoteric pathways that have little application to clinical practice, from instructors who do not emphasize what is and isn’t important.  Our book is divided into two halves. In the first half, we go over only the relevant neuroanatomy at each level – the cortex, brainstem, spinal cord and peripheral nerves.  We employ a strict “one picture, one page” rule where each figure fill an entire page and is accompanied by an entire page of explanatory text. The student gets to apply what they’ve learned in the second half: 25 real life cases, each with its own accompanying explanatory figure and text, and a clinical pearl, explaining how the neuroanatomy is relevant to clinical practice.

John: Only by learning, practicing and seeing how the neuroanatomy is applied to real patients, can it be understood and retained, and Case Closed! Neuroanatomy does that.


7. Do you have plans for future books?  What’s next in the pipeline for you both?

Warren: We’ve been told by a lot of students that they’d like a book on how to quickly perform and interpret the neurological exam that can fit in a lab coat or pocket for use on the wards. As soon as we catch a breather, we plan to work on that!

8. Can you describe your book in one sentence?

Warren: When it comes to neuroanatomy, Case Closed! Neuroanatomy is everything you need and nothing you don’t.