We caught up with Vera Kolb to learn the key to her success, as her book Handbook of Astrobiology is available to order now.


What first attracted you to the field of astrobiology?

The fact that the origin of life can be explained by chemistry.  I first learned this at the age of 13, when I read Oparin’s brochure on the origins of life. Oparin explained how biologically relevant chemicals can be made prebiotically, and how they could be organized into coacervates.

How did your training at the NASA Specialized Center of Research and Training shape your career?

It was my dream come true.  I was able to learn about astrobiology from top experts, Leslie Orgel and Stanley Miller, do research with them, and attend numerous seminars and lectures in the field.  This training provided a solid astrobiology foundation for me, and I have continued astrobiology research ever since.


What have been the biggest developments in astrobiology in the last 15 years?

First, the developments in the RNA World concept, which show over and over again, with more and more evidence, the capabilities of RNA to act as an enzyme and a primitive replicator. Second, prebiotic synthesis advancing to include numerous new concepts and paradigm shifts.  Third, space exploration has advanced tremendously.  We now know so much more about Mars and the other planets and bodies in our Solar System, and have made major discoveries of exo-planets.


How have your books addressed these developments?

These developments are covered in various chapters of the Handbook of Astrobiology, and my previous book Astrobiology: An Evolutionary Science.  I have chosen authors who could provide top expertise and   comprehensive views.


What do you want your audience to take away from the Handbook of Astrobiology?

The most important message is that the Handbook is comprehensive, since it covers numerous areas of astrobiology which have been intensely studied.  These include the above-mentioned areas of RNA and RNA world, prebiotic chemistry, space exploration, and much more.  “Much more” is essential, since astrobiology is an interdisciplinary field. The Handbook covers diverse topics such as defining life, astrobiology education, the nature of life, philosophical aspects of the origin of life, chemicals in the universe and their delivery on the early Earth, geology and the atmosphere on the early Earth, compartmentalization into coacervates and protocells, the universal tree of life, early primitive life on Earth, fossils of ancient microorganisms, biomarkers and the detection of life, life under extreme conditions, microbes in space, habitability,  the search for intelligent life in space, exo-planets, Solar System exploration, search for extra-terrestrial life in our Solar System, and planetary protection, among others.  No stone was left unturned in covering the important topics of astrobiology!


What do you predict will be the major changes/discoveries in astrobiology in the next 50 years?

The planetary exploration of Mars and other planets in our Solar System will reveal a lot about their specific planetary geology and habitability. The search for life on Mars and elsewhere in our Solar System will continue. Primitive forms of life may be found, especially on Mars.  Prebiotic synthesis is advancing, and so we may be able to understand better how the first primitive life emerged. Synthetic life from the simple biological molecules may be created.


What do you see yourself doing in ten years' time?

Continue participating in the astrobiology field as best as I can.  This would mean more research, more conferences, and more publications.


Who has influenced you the most in your career?

Oparin, the father of prebiotic chemistry, whose brochure on the origin of life sparked my interest in chemistry.  I feel that I have fulfilled my life dream to contribute to the question of the origins of life, and it all started with Oparin.  He gave me his dream and I carried it further.


What advice would you give to an aspiring researcher in your field?

Understand first that astrobiology is an interdisciplinary field, and thus learn as much as you can about the subject.  In the laboratory you will need to produce high quality research data, but must be able to interpret them in astrobiological context.  Go to as many conferences and seminars as you can.  Focus and take copious notes.
Understand that science is a house made of bricks that individual scientists lay.  Be proud of your brick.  It will be your scientific legacy.


What do you feel has been a career highlight?

Actually, the production of this Handbook.  I feel that I have poured in it all my astrobiology might.  I worked like crazy to make it happen and to make it happen fast, so that the chapters are all up to date. When I first held the big, heavy, thick Handbook in my hands, I was so proud that I was able to do it.


What is the last book you read for non-academic enjoyment?

“The Essays” by Francis Bacon. 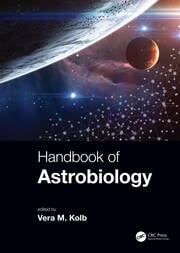