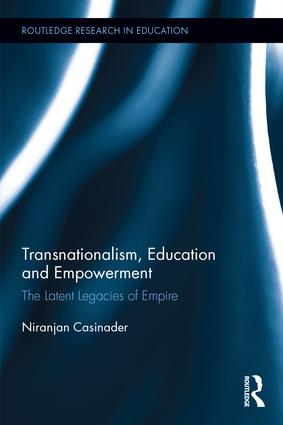 Transnationalism, Education and Empowerment challenges the prevailing notion that transnationalism is concerned fundamentally with the process of enhanced global population movement that has been allied with modern globalisation. Instead, it argues that transnationalism is a state of mind, disassociated from the notion of ‘place,’ that can be observed equally in societies of the past. Drawing on the context of colonial Sri Lanka and the British Empire, the book discusses how education in the British Empire was the means by which some marginalised groups in colonised societies were able to activate their transnational dispositions. Far from being a universal oppressor of colonised people, as argued by postcolonial scholarship, colonial education was capable of creating pathways to life improvement that did not exist before the European colonial period, providing agency to those who did not possess it prior to colonial rule.

The book begins by exploring the meaning of transnationalism, arguing that it needs to be redefined to meet the realities of past and current global societies. It then moves on to examine the ways education was used within the period of 18th and 19th century European colonialism, with a particular emphasis on Sri Lanka and other parts of the former British Empire. Drawing from examples of his own family’s ancestry, Casinader then discusses how some marginalised groups in parts of the British Empire were able to use education as the key to unlocking their pre-existing transnational dispositions in order to create pathways for more prosperous futures. Rather than being subjugated by colonial education, they harnessed the educational aspects of British colonial education for their own goals.

This book is one of the first to contest and critically evaluate the contemporary conceptualisation of transnationalism, particularly in the educational context. It will be of key interest to academics, researchers and postgraduate students in the fields of education, the history of education, imperial and colonial history, cultural studies and geography.

‘In recent years, the idea of transnationalism has entered registers of education in ways that are both insightful and productive, but also confusing and sometimes exaggerated. Using personal narratives, historical accounts and sociological imagination, this book is most helpful in not only clearing the debris of the recent literature on transnationalism, but also in suggesting ways we might rethink the curriculum and promote new approaches to pedagogy, to meet the requirements of the politics of cultural difference that can no longer be overlooked anywhere.’ - Fazal Rizvi, Professor of Global Studies in Education, The University of Melbourne, Australia

‘Transnationalism is characterised by tensions and contradictions, as well as hybrid and often mercurial phenomena. Consequently, it is a complex and often challenging field of study. However, this book provides new insights - both scholarly and personal in nature - to advance holistic and provocative educational responses to teaching and learning in culturally diverse environments.

An excellent companion to his first book, Dr. Casinader advances his unique approach to re-imagining transnationalism and its implications for teaching and learning.’ - Lucas Walsh, Associate Professor and Associate Dean, Faculty of Education, Monash University, Australia

1. Transnationalism: Reconfigurations of past and present

3. The British Empire: An imaginary of dualities and contradictions

5. Colonial Sri Lanka: Religion, sovereignty and the education of Empire

6. Movements of Mind and Body: A transnationalist story

7. Re-imagining Transnationalism: Trans-spatiality and implications for teaching, learning and beyond

Niranjan Casinader is Senior Lecturer in Education (Curriculum and Assessment) in the Faculty of Education at Monash University, Australia. Originally trained as a geographer, he worked as a secondary school educator for many years before moving into academia. His research is focused on three related principal strands: the notion of transnationalism in education, particularly in relation to the impact of culture on curriculum, pedagogy and thinking; the teaching of Geography and other Humanities subjects in schools; and the role of education in British colonial policy and practice, with an especial focus on its relevance to contemporary society.

This series aims to present the latest research from right across the field of education. It is not confined to any particular area or school of thought and seeks to provide coverage of a broad range of topics, theories and issues from around the world.