Editors of our title - Routledge Handbook of Private Security Studies, Rita Abrahamsen and Anna Leander, open up about their title and let us know what makes this title unique. 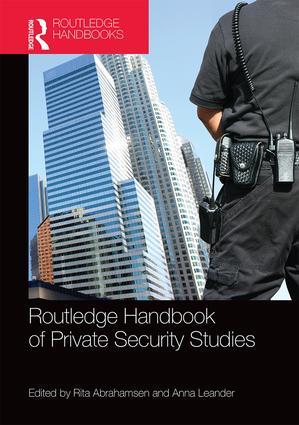 ‘This handbook is one of the first volumes to utilise a truly transdisciplinary approach to the privatization of security. In doing so, this handbook provides a vital and necessary contribution to this field. The volume provides a comprehensive picture of the full range of practices of privatization (from the everyday security of the individuals to the strategies of firms and their involvement on stakes regarding the governance of national security). In addition, theoretically, the book challenges the dualist visions opposing private and publicsecurity, and shows the far reaching consequences for democracy by discussing these hybrid entities that now populate the new global security assemblages.’ -- Didier Bigo, King’s College London, UK

‘This is an important volume drawing together a wide range of different perspectives to examine various aspects of private security and its implications for contemporary global society and politics. The volume’s assimilation of new and established scholars, several relevant disciplines, and distinct geographical perspectives opens the way for serious conversation about this ubiquitous phenomenon – and should be on the reading list of anyone seeking to understand it.’ -- Deborah Avant, University of Denver, USA

Q&A with the editors

Congratulations on the recent publication of your title the Routledge Handbook of Private Security Studies. What makes your book so unique to others in the field?

Thank you. We are really excited to have published this Handbook, which is the first volume to bring together the wide range of issues related to security privatization. While there are a lot of excellent books on security privatization, they are all specialised and focused on particular aspects or problematics. The Handbook, by contrast, covers the whole spectrum of issues and challenges arising from the massive global expansion of private security, ranging from its more spectacular military involvement to the more mundane, everyday aspects. The book is interdisciplinary and multidisciplinary, including international relations, politics, sociology, criminology, history, as well as geography, anthropology, cultural studies and law. What we are trying to do is to showcase the diversity of issues arising from security privatization, to expand the conversation between scholars working on this topic. In fact, we suggest that we might be seeing the emergence of a new field of study, which we cautiously label Private Security Studies.

Do you both have a favourite example in the book?

There are so many to choose from… The book has 26 chapters, and almost all of them include fascinating examples and empirical illustrations. That is one of the unique features of the book; it combines theory and practice, showing not only how security privatization challenges many of our theories about state, authority and global governance, but also how it impacts almost all aspects of modern life across the globe. So, for example, there are important race and gender aspects to how private security companies operate. Private actors also play key roles in migration control in Europe, prisons services in the US, and in combatting piracy on the high seas. And in Africa, global private security companies are crucial to urban security, resource extraction and humanitarian assistance. The book has numerous examples like this, and it also covers the historical role of private force in state building and colonization, so it is really difficult to point to only one example. There are just so many good ones.

What first attracted you to this topic as an area of study?

We have both been working on private security issues for many years and what struck us was how dynamic this area of study was, but also how relatively little dialogue there was between various disciplines engaged with the topic. Doing the Handbook was an opportunity to begin that dialogue, and to strengthen conversations across disciplinary boundaries. This is crucially important as the growth and expansion of private actors are reshaping how security is delivered and governed. When we first started working on this topic, from our different angles and with different empirical focus, security privatization was a relatively new phenomenon and we knew relatively little about its impacts. Now the field of study has expanded enormously, but highlighting the transformations associated with privatization and commercialization, and critically examining them, remains crucially important, especially as private security has become so widespread as to go almost unnoticed.

What findings in writing/researching the book surprised you?

We were surprised by how quickly the field is evolving and changing. Many of the contributors came up with new and challenging angles and perspectives on how to understand and analyse privatization, and we see this as one of the strength of this field of research. It allows for innovation and expansion.

Who do you think would be interested in reading your book?

The book should be of interest to a broad range of readers, including students, practitioners, policy-makers and researchers. Because it is transdisciplinary, it has something of interest even for those who are very familiar with the topic; so for example, those in International Relations or Criminology can learn from the Law perspective, or from a more cultural approach, and vice-versa. For those who are entirely new to the topic of security privatization, the Handbook provides a comprehensive, yet cutting edge introduction.

Do you have plans for future books? What’s next in the pipeline for you both?

We are both continuing work in this area and will of course be publishing more work. But perhaps more importantly our intention with the Handbook is to spark interest in research in this field. We therefore hope that there will be a growing discussion including many new publications appearing in this area and we will both work to ensure that this becomes the case.

This new Handbook offers a comprehensive overview of current research on private security and military companies, comprising essays by leading scholars from around the world.

The increasing privatization of security across the globe has been the subject of much debate and controversy, inciting fears of private warfare and even the collapse of the state. This volume provides the first comprehensive overview of the range of issues raised by contemporary security privatization, offering both a survey of the numerous roles performed by private actors and an analysis of their implications and effects. Ranging from the mundane to the spectacular, from secretive intelligence gathering and neighbourhood surveillance to piracy control and warfare, this Handbook shows how private actors are involved in both domestic and international security provision and governance. It places this involvement in historical perspective, and demonstrates how the impact of security privatization goes well beyond the security field to influence diverse social, economic and political relationships and institutions. Finally, this volume analyses the evolving regulation of the global private security sector. Seeking to overcome the disciplinary boundaries that have plagued the study of private security, the Handbook promotes an interdisciplinary approach and contains contributions from a range of disciplines, including international relations, politics, criminology, law, sociology, geography and anthropology.

This book will be of much interest to students of private security companies, global governance, military studies, security studies and IR in general.

Rita Abrahamsen is Professor in the Graduate School of Public and International Affairs at the University of Ottawa. She is author (with M.C. Williams) of Security Beyond the State: Private Security in International Politics (2011) and Disciplining Democracy: Development Discourse and the Good Governance Agenda in Africa (2000).

Receive a 20% discount* on Routledge Handbook of Private Security Studies! Simply enter the code AQA16 when ordering online from www.routledge.com.

*Discount is only available on print books purchased from www.routledge.com, and cannot be combined with any other offer or discount.