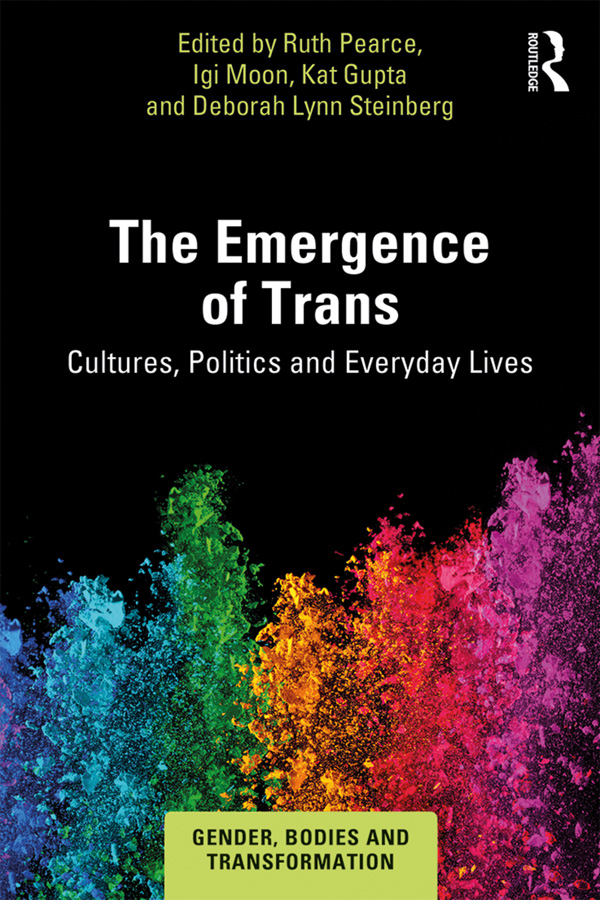 The Emergence of Trans

This book represents the vanguard of new work in the rapidly growing arena of Trans Studies. Thematically organised, it brings together studies from an international, cross-disciplinary range of contributors to address a range of questions pertinent to the emergence of trans lives and discourses. Examining the ways in which the emergence of trans challenges, develops and extends understandings of gender and reconfigures everyday lives, it asks how trans lives and discourses articulate and contest with issues of rights, education and popular common-sense. With attention to the question of how trans has shaped and been shaped by new modes of social action and networking, The Emergence of Trans also explores what the proliferation of trans representation across multiple media forms and public discourse suggests about the wider cultural moment, and considers the challenges presented for health care, social policy, gender and sexuality theory, and everyday articulations of identity. As such, it will appeal to scholars and students of gender and sexuality studies, as well as activists, professionals and individuals interested in trans lives and discourses.

"This important book brings together key figures in contemporary trans academia, activism and art, to explore the notion of ‘trans’ in all its complexity. It is essential reading for anyone who wants to learn, from those who really know, about trans identities and trans lives. Its key message is one of hope, and at a time when trans people face a renewed backlash against their very existence, this text will nourish them and their allies for the struggle. This fascinating, multidimensional project is a model for the kind of thinking and politics we all need today." - Alison Phipps, Professor of Gender Studies, University of Sussex, UK

"The Emergence of Trans is a much-needed and multi-faceted exploration of how the meaning of trans has taken shape. A range of brilliant essays and artwork plot the breakaway of trans from a history of discourses that position trans as degenerate and pathological to become a term that reflects a myriad of identities and experiences today. It also looks towards the future, to the potential that trans holds to change the world for everyone."

"The Emergence of Trans: Cultures, Politics and Everyday Life is a must read for anyone who wants to gain a better understanding of trans life, history, culture and politics. I would recommend it to every healthcare provider’s reading list."

"The Emergence of Trans’

is a compelling read. I was drawn into each chapter and eager to read each author’s contribution. The book makes for an insightful and thought-provoking read for all interested in the exploration of identities. With the flowering of trans identities this discussion has never been more relevant than now. This book reflects much of the work we see at cliniQ with people exploring their identity in our therapeutic service, and brings the discussion of what is means to be trans into focus." - Michelle Ross, Director of cliniQ sexual health and well-being service, London, UK

"Brilliant - captivating razor-sharp theory without pretence or obfuscation, this collection embraces the creative, playful, exploratory dimensions of scholastic enquiry. A vital and cohesive contribution to Transgender Studies within Social Sciences."

Introduction: The Many-Voiced Monster: Collective Determination and the Emergence of Trans

1. In the Shadow of Eugenics: Transgender Sterilization Legislation and the Struggle for Self-determination

2. Reconceiving the Body: A Surgical Genealogy of Trans-Therapeutics

4. The Seam of Skin and Scales

6. DIY Identities in a DIY Scene: Trans Music Events in the UK

7. On Being a ‘Wife’: Cis Women Negotiating Relationships with a Trans Partner

8. Sticks and Stones Break Our Bones, and Words Are Damaging: How Language Erases Non-binary People

9. Response and Responsibility: Mainstream Media and Lucy Meadows in a Post-Leveson Context

14. A Genealogy of Genealogies – Retheorising Gender and Sexuality: The Emergence of ‘Trans’ (ESRC Seminar Series 2012-2014)

Ruth Pearce is a Research Fellow in the School of Sociology and Social Policy at the University of Leeds, UK. Her research explores issues of inequality, marginalisation, power and political struggle from a trans feminist perspective. She is also the author of Understanding Trans Health: Discourse, Power and Possibility.

is Associate Fellow in Sociology at the University of Warwick, UK. They have written on therapy, sexuality and gender in Feeling Queer: Queer Feelings: Radical Approaches to Counselling Sex, Sexuality and Gender and are editor of Counselling Ideologies: Queer Challenges to Heteronormativity. They represent the British Psychological Society as Chair of the Coalition Against Conversion Therapy.

is Lecturer in English Language and Linguistics at the University of Roehampton, UK. Their research uses corpus linguistics and critical discourse analysis to explore representation, marginalisation and power, with a particular focus on LGBT, queer and gender issues.

was Professor of Gender, Culture and Popular Media in the Department of Sociology at the University of Warwick, UK. She wrote widely on gender and sexuality politics, with books including Border Patrols: Policing the Boundaries of Heterosexuality (with D. Epstein and R. Johnson) and Bodies in Glass: Genetics, Eugenics, Embryo Ethics as well as on politics and public mourning in Mourning Diana: Nation, Culture and the Performance of Grief (with A. Kear) and Blairism and the War of Persuasion (with R. Johnson). She was also the author of Genes and the Bio-imaginary.

This series explores the intersection of two key themes in relation to scholarship on bodies: gender and transformation. Bodies are gendered via biology, culture, medicine and society, such that gender, so deeply and intimately connected to identity, is a crucial part of any thorough analysis of the body. At the same time, bodies are - and have always been - sites of transformation, whether through 'natural' processes such as pregnancy, illness and ageing, or the more eye-catching, 'unnatural' transformations of cosmetic surgery, violence, extreme bodybuilding or dieting, cross-species transplantation, elective amputation or tattooing. Interdisciplinary in scope and welcoming work from a range of approaches, including cultural and media studies, sociology, gender studies, feminist theory, phenomenology, queer studies and ethnography, Gender, Bodies and Transformation publishes scholarly examinations of contemporary cultural changes that are relevant to both gender and the transformation of bodies, whether in single bodies or between bodies.