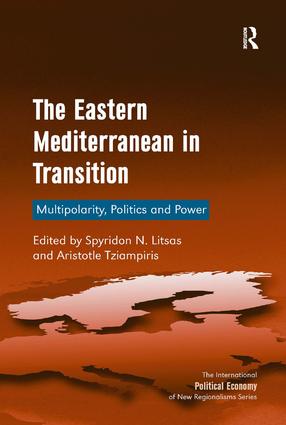 The Eastern Mediterranean in Transition

The wider region of the Eastern Mediterranean is in transition. What is being evinced is a situation of continuous volatility, centering on developments such as the ’Arab Spring,’ the Greek sovereign debt crisis, Islamic terrorism, the continuation of deadlock over the Cypriot and Palestinian Issues, significant energy finds in the Levantine Basin, concerns over nuclear proliferation and, more recently, the Syrian Civil War. At a systemic level, the move towards a regional multipolar reality has also contributed to volatility by creating a crescendo of antagonisms between all the major international actors who continuously strive for more influence, power and prestige. This collective project by leading experts represents a unique combination of International Theory and International Politics analysis that deals exclusively with the wider Eastern Mediterranean. It scrutinizes in a multidimensional manner the current geostrategic and geopolitical conditions that include the latest domestic socio-political events, as well as the active involvement of the Great Powers in the region. This book should be of interest to academics, decision-makers and a general reading public focusing on a significant and influential region in flux.

’A hugely important collection of essays that provides an abundance of hitherto untapped materials and sheds important fresh light on the spreading turbulence in one of the world’s foremost geostrategic areas.’ Efraim Karsh, King’s College London, UK and Bar-Ilan University, Israel ’This is a deliciously fresh and, at the same time, systematic and thought-provoking look at the changing role of the Eastern Mediterranean in international politics. It brings together a group of distinguished experts and does what the title promises and much more. It will be of interest to students, scholars and practitioners alike.’ Kostas A. Lavdas, Tufts University, USA