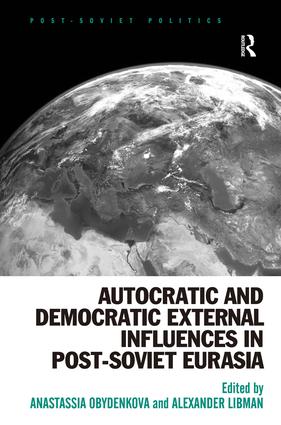 As the Ukrainian Crisis shows both political regimes and national borders in Eurasia are still in a state of flux. Bringing together literatures on the external influences of democratization, the post-Soviet space and support for autocracy Autocratic and Democratic External influences in Post-Soviet Eurasia provides a comprehensive overview of the interaction of domestic and international politics during times of regime transition. Demonstrating the interplay of these forces the book explores the rich variation in motives and channels of autocratic and democratic influences. International scholars consider two channels of external influence on regime transition; the role of supranational organizations established by non-democracies and the role of non-governmental organizations and through a set of carefully chosen case studies offer a new theoretical discussion on the phenomenon of multi-level regime transition.

’Bringing together an impressive and diverse range of scholars, this book helps explain the great divergence in outcomes of regime transition in the post-Soviet states of Eurasia. Theoretically innovative and empirically rich, the work’s focus on external factors includes original analysis of the multiple types of interactions between the states themselves, exposing the continuing powerful contradictory dynamics of democratising and authoritarian impulses combined with opposed pressures for integration and separation, which in the case of Ukraine came to threaten the whole structure of European international politics.’ Richard Sakwa, University of Kent, UK ’Autocratic and Democratic External Influences in Post-Soviet Eurasia is one of the very first studies that systematically explores how the European Union, Russia, and the Eurasian Economic Union support democratic or autocratic forces in post-Soviet countries. The various contributions forcefully demonstrate how governmental and non-governmental actors can contribute to diverging processes of democratic change and autocratic stabilization at the supranational, national and subnational level.’ Tanja A. BÃ¶rzel, Freie UniversitÃ¤t Berlin, Germany ’This book makes an important contribution to the literature because it is among the first to provide a wide-ranging understanding of how international factors influence regime development, whether in democratic or autocratic directions. Moreover, it is path-breaking in its focus on the role that subnational governments play in the broader process of national regime evolution.’ Robert Orttung, The George Washington University, USA ’This book offers a pioneering and fascinating contribution to our understanding of external influences on the transition of post-Soviet Eurasian states. With theoretical insights and carefully researched chapter studies it expands on the democratisation literature in particular by examining the important and topical phenomeno

Anastassia Obydenkova is a Senior Researcher and an Associate Professor (accredited) at the Universitat Pompeu Fabra, Department of Political and Social Science (Barcelona, Spain) and Ministry of Innovation and Science of Spain (Madrid). Alexander Libman is a Researcher at the German Institute for International and Security Affairs Stiftung Wissenschaft und Politik. Before that, he was an Assistant Professor of International Political Economy at the Frankfurt School of Finance & Management.