Author of Comparative Regionalism, Etel Solingen, takes a little time to tell us about her new book and what she's been up to!

‘Etel Solingen is one of the leading scholars in the world who helped recreate the field of comparative regional analysis. Put conveniently between two covers, the chapters in this book summarise her trenchant and highly original views. A standard reference work for all serious scholars for years to come.’--Peter J. Katzenstein, Cornell University, USA

1. Congratulations on the publication of your book Comparative Regionalism! What lead you to writing it?

The scholarship on regionalism has exploded since the end of the Cold War. It has also become more specialised, with some studies focusing primarily on regional institutions, others on regional economic arrangements, “identities,” or power relations. I wanted to bring together work that subsumes critical aspects of regionalism under a common conceptual framework. I had first proposed that framework in the early 1990s and expanded its scope and geographic applications in subsequent work. The point of departure was the variable impact of globalisation or internationalisation on the domestic politics of states. The second analytical step was to outline how domestic politics, in turn, shaped variation in regional orders. The third step explored the reciprocal influence between regional orders and the domestic politics of states, from economic reform and democracy to attitudes regarding regional conflict and cooperation. Preparing this volume allowed me to take stock of whether and how those relationships changed over recent decades. Significant shifts in the global political economy and in the internal political landscape of states offered the opportunity to gauge their effects on the evolution of regions. Finally, the different chapters reiterate the importance of designing genuinely comparative studies that don’t examine every region against the European experience.

Different domestic models of political survival emerge in response to internationalisation and, in turn, explain the evolving nature of regional orders in economics and security.

4. Do you have any events lined up? Attending any conferences?

I am very fortunate to have the opportunity to discuss some of these ideas at a special panel organised for the international conference sponsored by the Facultad Latinoamericana de Ciencias Sociales (FLACSO) and the International Studies Association (ISA) in Buenos Aires later this month. I also discussed them at a recent workshop organised by Freie Universität’s Berlin, Kolleg-Forschergruppe "The Transformative Power of Europe," and explored some implications for the Eurasian region at the international conference organised by Collegium Civitas and ISA in Warsaw. Additional activities are lined up once the book gets published in August 2014.

5. Are there any relevant world issues that your book relates to at the moment?

First, developments in the former Soviet space, particularly surrounding the turmoil in the Ukraine but also a changing Central Asia, offer an opportunity to reflect on some of the themes addressed in the book. What defines the character and boundaries of regions (what is Eurasia?) What are the implications of domestic transformations (or lack thereof) for regional conflict and cooperation across the different geographical configurations one can use to define that region? Second, ongoing upheavals in the Middle East continue to raise perennial questions regarding relations between economic reform, democracy and regional cooperation, themes that are amply discussed in various chapters. Third, some fear that current maritime disputes, rising nationalism, and the ascent of China might upset East Asia’s decades-long trajectory free of interstate wars, another focal point in the book. There is a lively debate regarding whether or not the forces that promoted stability and prosperity will be strong enough to resist growing frictions. Fourth, for several decades some have predicted a march toward growing numbers of nuclear-armed states in East Asia. The book offers an explanation for why Japan, South-Korea, Taiwan and others have defied those predictions thus far, despite North Korea’s ever more aggressive stands. The North Korean anomaly fittingly reflects the kind of inward-looking model of political survival that has been most prone to embrace nuclear weapons since the Non-proliferation Treaty entered into force in 1970. Finally, the very fact of ongoing negotiations with Iran over a final agreement on its nuclear programme brings to relief the relevance of Iran’s shifting domestic political landscape to changes in its international stance.

6. Do you have plans for future books? What’s next in the pipeline for you?

Future books are definitely in the planning. As for articles, just out of the pipeline is one addressing ongoing comparisons between China’s rise and that of Wilhelmine Germany on the eve of World War 1 (International Security, Summer 2014). Some predictions of a looming war--with China at the centre—also invoke the presumed failure of globalisation to stem the outbreak of the Great War exactly one hundred years ago. My take on that builds on parts of the argument advanced in Comparative Regionalism. I conclude that China in 2014 is far from a perfect comparison with Germany’s Keiserreich in 1914. Furthermore, the global political economy--the “world-time” against which ruling coalitions operate today--is dramatically different for both periods. Analogies may be useful but ahistorical ones may be deficient and dangerous: they can infuse actors with flawed protocols for international behaviour. The choice between presumed atavistic tendencies toward war and accommodation exists, and models of political survival detailed in this volume are, I believe, crucial to that choice. 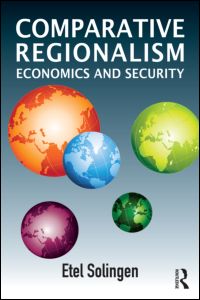 This book comprises key essays on comparative regionalism and, more broadly, on regional conflict and cooperation by Professor Etel Solingen.

The study of regionalism, a subject pioneered by Solingen in the 1990s, is now an established field of inquiry, with a large community of scholars and practitioners around the world. This book provides a window into an evolving conceptual framework for comparing regional arrangements, with a special emphasis on non-European regions. Framed by a comprehensive, previously unpublished introduction, the chapters provide a broad spectrum of analysis on domestic political economy, democracy, regional institutions, and global forces as they shape different regional outcomes and trajectories in economics and security. Themes as different as the regional effects of democratization in the Middle East and East Asia, the rise of China, Euro-Mediterranean relations, and regional nuclear trajectories are traced back to a common analytical core. The nature of domestic ruling coalitions serves as the pivotal analytical anchor explaining the effects of globalisation and economic reform on different regional arrangements.

This collection provides a focal point that brings this work together in a new light and will be of much interest to students of regionalism, international relations theory, international and comparative political economy, international history and grand strategy.

‘Etel Solingen is one of the leading scholars in the world who helped recreate the field of comparative regional analysis. Put conveniently between two covers, the chapters in this book summarise her trenchant and highly original views. A standard reference work for all serious scholars for years to come.’--Peter J. Katzenstein, Cornell University, USA

‘Etel Solingen’s work has provided unique contributions to our understanding of regionalism. Her detailed knowledge of three major regions—East Asia, Latin America, and the Middle East—is the underpinning for insights into the forces shaping regional orders around the world. This superb volume will be required reading for all who are interested in the relationship between globalisation, regionalism and domestic political coalitions’ -- John Ravenhill, Balsillie School of International Affairs, Canada

'Etel Solingen is one the most distinguished and thoughtful scholars of regionalism. Comparative Regionalism: Economics and Security includes some of her most important and influential work on this topic. Skillfully blending novel theoretical insights with a broad empirical sweep, Solingen’s study will be of interest to scholars of comparative politics and international relations alike.'-- Edward Mansfield, University of Pennsylvania, USA

Etel Solingen is Thomas T. and Elizabeth C. Tierney Chair in Peace and Conflict Studies at the University of California Irvine, USA, and former Chancellor’s Professor. She has served as President of the International Studies Association.