A Q&A with Simon Goodwin

We are pleased to share with you our Q&A session with Simon Goodwin, author of Beep to Boom.

About the book and subject area

Congratulations on the publication of your book ‘Beep to Boom’; what do you want your audience to take away from the book?

Interactive audio is the future of all sound technology, and there are great creative opportunities to be explored, once you master the associated practical and technical challenges. Beep to Boom explains why and how to do that, in lucid but rigorous terms. It will enable many people to raise the bar for games, audio installations, VR and AR experiences. That’s going to be a lot of fun, for them and their growing audiences worldwide.

There’s no other book like it; I’m an experienced engineer, writer and explainer who has found commercial and professional success in the new field of interactive audio. I’ve been investigating and answering recurrent questions for decades, often in a somewhat circular fashion because interactive audio is a new synthesis of sound design, psychoacoustics, user-feedback, digital systems programming and practical hacks. Beep to Boom brings these concepts together, links them up with pragmatic analysis and engineering, and shows how the whole soon becomes much more than the sum of the parts.

The time is right, with the growing realisation that ‘black box’ audio runtimes are both expensive and creatively limiting, and the pervasive uptake of Ambisonics – a technology generally thought to have failed in the 1980s, now seen as way ahead of its time and ideal for VR and scalable interactive games and installations.

What first attracted you to Technology and Engineering as an area of study?

I’m an inventor. I like taking things apart and putting them back together, better. I started with analogue electronics in the 1970s, then microprocessors came along and I introduced more software. Same concepts, new Lego. Nowadays FPGA (Field-Programmable Gate Array technology) blurs the distinction, and production engineering drives the alternation of software and hardware solutions faster and faster. It’s exciting.

(Two-part question) a) What are the main developments in research that you’re seeing in your subject area of expertise? b) How does your book relate to these recent developments?

Higher-order Ambisonics and related tech like Wavefield synthesis, personalised HRTFs (Head-Related Transfer Functions) volumetric (as opposed to point) sound sources, dynamic reflections, audio geometry, psychoacoustics, synaesthesia and customisation for unique listener experiences. Particularly interesting research relates to teaching computers – and the appliances computers have become - to listen. They’re quite good at speaking, in words, music and ambience, already. Now they need to unobtrusively take account of their listeners and their environment, and tailor what they do to fit in with the varying needs of their audience – as individuals, rather than an undifferentiated mass forced to accept generic compromises that suit no one in particular.

Interactive, object-orientated audio brings more of the sound artist’s creative materials to the ears of the listener than has been possible before. It also gives the listener much more of a say in what they hear. Object audio is eclipsing the old pre-baked multitrack mixes, and represents a new way of thinking about individual perception in the context of mass media. What was once a niche, confined to computer gaming, is now mainstream.

Beep to Boom sets out the differences between old and new media creation, delivery and consumption, and many of the technical consequences and trade-offs. It shows how to gather salient information about the listener, directly and indirectly, and ways to use it. There’s still loads of scope for creative synergy and the cross-fertilisation of ideas from diverse disciplines.

What audience did you have in mind whilst writing your book?

People fascinated by sounds and technology, interested in how audio systems have developed from primitive beeps on rare research hardware to embrace hundreds of millions of modern interactive devices – telephones, tablets, game consoles, arcade machines, desktop and laptop computers – all with high-resolution audio capabilities and massive DSP power. People like technical sound designers, electronics and software engineers, game designers and programmers, producers, scientific and artistic researchers; the creators and enablers of new media and those who want their work to last into the future.

What makes your book stand out from its competitors?

Is there one piece of research included in the book which surprised you or challenged your previous understanding of the topic?

The widespread ignoring of established standards in new media, sometimes for good reasons, but often through ignorance, mostly because of poor communication and lack of respect and common ground between researchers and practitioners. Beep to Boom is peppered with examples of things not working because of mistaken assumptions, and illuminating experiments that show what’s really going on and how to work with rather than against that.

What did you enjoy about writing the book?

Meeting and talking with dozens of former colleagues and friends, collecting, comparing and framing their insights – feeling the book come together and the sense of coherence and completion as it gelled.

I’m not an academic. I’ve got a good degree in Computing Science, but had been working with bright graduates for years by the time I got to University so my priorities were learning about people and making sure I didn’t upset the prejudices of my examiners. I spent much of my time there making radio programmes and editing the student newspaper. I did almost all my coursework on homebrew hardware and lived for several years on the proceeds from licensing my final year project. It was fun when my lecturers realised it was me writing the ‘advice’ columns they were reading. Of course I did learn stuff too, especially Social and Professional aspects.

Since then I’ve been busy making stuff, explaining it and mentoring others. This has drawn me into advisory roles on academic research projects, including the current EPSRC programme ‘Future spatial audio for an immersive listener audience at home’ and the AHRC’s exciting ‘Rethinking the senses’ project. I have also written research papers, helped to set up the Audio Engineering Society’s ‘Audio For Games’ international conference series, given talks and answered questions at GDC (the California Game Developer Conference), BBC R&D and many University events. I deliver ‘impact’, apparently.

What is innovative about your research?

I don’t think many people, outside the games industry, get the chance to test their ideas on an audience of millions of eager listeners, year after year, and collect live analytics on how they’re using it, or not. That’s the beauty of working in interactive entertainment, being a ‘central technologist’ in a flourishing global market of tech-savvy early adopters.

Showing – with 3D7.1 – how a fully periphonic and reconfigurable 3D soundfield can easily be delivered on standard HDMI consumer Hi-Fi equipment, while remaining compatible with stereo and flat cinematic 5.1 mixes. Turning the ‘rhythm action’ concept on its head with Dance Factory, the patented console game which creates new dances and gameplay from the player’s own music collection.

Tell us an unusual fact about yourself and your teaching or writing style?

I write my explanations to be read aloud. I’m more concerned with what things do than how they’re labelled. I look forward to the questions.

Listen. Then Think. Then Listen again. Then read a bit. Then put something new together.

Do you have plans for future books?

Yes, but they depend if someone else writes them first. Plenty of ideas!

Bringing Ambisonics into the mainstream. Various patents and a couple of BAFTAs (the only things I did which ever impressed my mum).

What do you see yourself doing in ten years' time?

What is the last book you read (non-academic)? 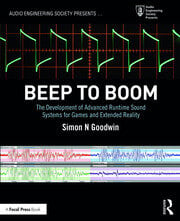 Simon N Goodwin is an Interactive Audio Technology Consultant who has designed and implemented advanced Ambisonic 3D audio technology in multi-million-selling games, including six number 1 hits in the UK and major EU territories and two BAFTA award winners, RaceDriver Grid and F1 2010. Simon has been making games and inventing audio technology since the heyday of discrete transistors and one-bit sound. He is expert in console, mobile and PC audio and streaming system development, variously working as a sound designer, game audio programmer and audio systems engineer. He was Principal Programmer on the DTS team which developed the 3D audio tech in the VR hit Elite: Dangerous. Simon has been granted five US and UK patents, advises on AHRC and EPSRC research programmes and gives talks at GDC, AES, BBC and University conferences.