Congratulations to Ryan Hayward, being named as CRC Press's Mathmatics Author of the Month for June 2019!

CRC Press is pleased to share with you our author Q&A session with Ryan Hayward!

Enjoy board games? Here's the theory behind the fun: 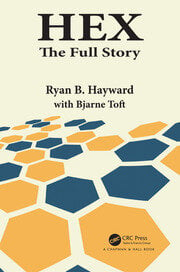 Congratulations on the publication of your book. What do you want your audience to take away from the book?
That the game of Hex has a fascinating history, interweaving Piet Hein, John Nash, Claude Shannon, Martin Gardner and unsung heroes such as Jens Lindhard and Karen Thorborg. And of course that Hex is fun and challenging game to play (and if you read the book you will quickly get to intermediate level).
What inspired you to write this book?
I learned the game as a young Ph.D. student from the famous French mathematician Claude Berge.  His enthusiasm for Hex was infectious, and he showed me some theory that quickly improved my play.  Once I found out that there was no book at the game, I thought about writing one, but until recently never had the time.
What are the main developments in research that you’re seeing in your subject area of expertise?
Of course it's an exaggeration to say that this book is the full story of Hex, but it does cover many aspects of the game, history, theory, variations, how to solve puzzles, computer Hex.
How does your book relate to these recent developments?
With respect to computers and games, a recent breakthrough was Google DeepMind's creation of AlphaGo and AlphaZero, the first game programs to reach superhuman strength in the game of Go. In the book I discuss how the ideas behind these program will eventually filter over to Hex. For now though, the world's strongest Hex player is a human, not a bot.
What audience did you have in mind whilst writing you book?
This book is for everyone, from high school students on up. I hope it will interest fans of board games such as chess and Go, but also those who are curious how a simple game that came out of World War II managed to attract the interest of the game theorist John Nash, the artificial intelligence investigator Claude Shannon, and the game and puzzle writer Martin Gardner.
What makes your book stand out from its competitors?
As far as I know, the only other Hex book is Cameron's Browne 20-year old book on Hex Strategy. My book takes a more historical approach, telling the whole story of Hex, including recent developments. Everyone has their own version of a story, this is mine.
Is there one piece of research included in the book which surprised you or challenged your previous understanding of the topic?
I'm a mathematical computer scientist by trade, but I've always been interested in history. One of the things I was looking forward to learning was how Piet Hein --- the game's inventor --- had created such beautiful Hex puzzles.  Well, almost at the end of our research, my Bjarne Toft (who helped with research and editing) and I tracked down a long-forgotten collection of rough drafts that show that Hein didn't create his puzzles, he outsourced the to the young physicist Jens Lindhard (who later worked with Nobel laureate Niels Bohr). That was an amazing day, when Bjarne found those documents.
What did you enjoy about writing the book?
After thinking about the book for years, it was great to finally be able to sit down and write it.  Having a co-author who was as fascinated with the story as I was made it easy to keep writing.
What is your academic background?
I'm a mathematical computer scientist. I fell in love with math as an undergrad, when I saw some beautiful theorems in group theory and later graph theory. My early work was on graph theory, lately I've been working on algorithms for 2-player games.
Who has influenced you the most?
I had many fantastic teachers, Dan Norman, Peter Taylor, Vasek Chvatal to name a few.  Of course I was impressed by their analytical abilities, but I was also struck by how much effort they put into polishing their prose.
What first attracted you to Hex as an area of study?
The game of Hex has many beautiful theorems, for example, that the game cannot end in a draw, or that the first player can win. Paradoxically, while we know that the first player can win, it is provably difficult to find explicit winning strategies. To date, computers have found such strategies only for boards up to size 10x10.
What do you think are your most significant research accomplishments?
My research group has built arguably the world's strongest Hex solver, e.g. we found the 10x10 strategy mentioned above.
Tell us an unusual fact about yourself and your teaching or writing style?
I'm a bike commuter, even in winter. Lately I've been riding recumbent bikes.
Do you have plans for future books? What’s next in the pipeline for you?
To complement this longish book. I've been thinking of writing a really short intro to Hex.
What is the last book you read (non-academic)?
I like to read Denise Mina and Ian Rankin. It's a crazy world out there: sometimes I need a little revenge fiction --- say Lee Child --- before I fall asleep. My favorite kids book is I Want My Hat Back by Jon Klassen, revenge fiction for wee ones.

Find out more about Ryan Hayward!

Keep up to date with the latest Math & Stats books, news and #AuthoroftheMonth by following us on Twitter.