We are pleased to share with you our author Q&A session with Donald R. Prothero! Author of California's Amazing Geology, Prothero talks about his title and what makes it stand out, which is available for purchase here. 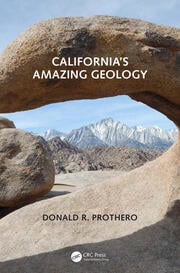 1.      Congratulations on the publication of your book California's Amazing Geology! What led you to writing it?

I've been doing geological research in California for many years, and have taught college geology in California for over 35 years. I have run field trips to nearly every corner of the state, so I know the geology of the entire state pretty well. In addition, I was born and raised here (2nd generation), and my great-great-grandfather was in the California Gold Rush, so I have deep roots here. I started to teach California geology as a separate course a few years ago, and found that there were no good up-to-date textbooks on the market. Since I've written 6 other geology textbooks, I thought there was a need for this book. In addition, it serves as a useful guide to anyone interested in the geology of California.

2.      California is famous for earthquakes; is our ability to predict when and where earthquakes improving?  If so, how?

Actually, short-term earthquake prediction is widely considered to be impossible, because no two earthquakes are alike, and no two earthquakes have the same precursors--or ANY precursors--so it will probably always be impossible to predict them in the time frame of hours to days to weeks. Long-term prediction (years to decades) is already in place, since we know many places in active fault lines that are "overdue" to have an earthquake. But that won't help you get out of the way in the short term.

3.      What would you say makes California's Amazing Geology stand out from its competitors?

California's Amazing Geology has almost no competition. The one or two existing books about California are decades out of date, and especially are weak on the tectonics and the recent understanding of why California's geology is so complex. I tried to make this complex story as simple and understandable as I could.

4.      Do you have any exciting events lined up and will you be attending any upcoming conferences?

I will be at the Society of Vertebrate Paleontology meetings in Calgary in late August, and at the Geological Society of America meetings in Seattle in late October, where I"m happy to promote the book or do a signing if CRC/T&F are there.

I'm one of those kids who got hooked on dinosaurs at age 4 and never grew up. I knew I wanted to be a paleontologist as soon as I knew what that word meant. I was collecting fossils here in California since my days as a Cub Scout. When I got to college, you had to become a geologist first to become a paleontologist, so I double majored in geology and biology at the University of California Riverside (where I took LOTS of field trips all over the state). Over the years, I've taught nearly every subject in the geology college curriculum.

6.      The San Andreas Fault is famous, what are the other famous geological faults of California?  Which faults are the most active?

California has literally thousands of faults, most of which are running parallel to the San Andreas fault, since they are taking up the stress along the plate boundary that the San Andreas fault represents. Many of the faults are named, although most non-geologists would not have heard of them. The Hayward fault up in the Bay Area, which runs beneath Berkeley, Oakland, Alameda, and all the East Bay cities, is pretty famous. The Newport-Inglewood fault in Southern California is often mentioned because it was the source of the 1933 Long Beach quake, and also the trap for most of the oil fields in that region.

7.      Do you have plans for future books? What’s next in the pipeline for you?

My next few books are "UFOs, Chemtrails, and Aliens" from Indiana U. Press, due out this summer; the second edition of "Evolution: What the Fossils Say and Why it Matters" from Columbia U. Press, out this fall; "The Story of the Earth in 25 Rocks" also from Columbia, also out this fall. I just finished a new historical geology textbook, "The Evolving Earth" for Oxford U. Press, due out next year, and I have books in progress for Johns Hopkins U. Press, and Smithsonian Books, and another one for Columbia.

8.      Are Tsunamis likely along the California coast?  What is the geological record of tsunamis in coastal rocks of California?

Tsunamis do happen along the California coast if there is a big earthquake somewhere else in the Pacific, such as the Alaska quake of 1964, which damaged the coastline near Eureka. The faults of California, however, do not cause tsunamis since they are nearly all on land.

This book is an up-to-date summary of the incredible geologic features of California, including not only its regional geology, but also discussions of it resources: gold, groundwater, beaches, oil, and fossils.