CRC Press is pleased to share with you our author Q&A session with Michael J. Kennish, editor and author of Practical Handbook of Marine Science 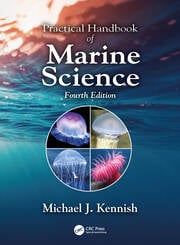 Congratulations on the publication of your book Practical Handbook of Marine Science, Fourth Edition. What do you want your audience to take away from the book?

There are several key take-home messages to be derived from this book.

First, the oceans of the world are critically important for sustainability of the planet and the long-term survival of humanity. They are major sinks for the increasing heat generated on earth by climate change and the receiving waters for anthropogenic wastewaters and numerous pollutants. Despite their great expanses, the oceans have finite capacity to assimilate and process human pollutants.  It is necessary for people to be cognizant of the magnitude and significance of human impacts on ocean environments.

Second, the oceans are of great economic value, supporting multitrillion dollar tourism activities, recreational and commercial fisheries, aquaculture operations, electric power generation, oil and gas resources, marine transportation, and shipping. In addition, they are vital sources of natural substances used in production of medicines and pharmaceuticals. The world economy is closely coupled to the wide array of resources and services provided by the oceans.

Third, the oceans are complex ecosystems requiring collaborative research efforts of scientists from different disciplines of study to advance our understanding of the structure and function of the marine realm.

What audience did you have in mind whilst writing you book?

The fourth edition of Practical Handbook of Marine Science is designed as an essential reference volume for marine and estuarine scientists, professors and students, coastal and resource managers, program administrators, policy makers, and other professionals engaged in some aspect of work on marine and estuarine environments. The comprehensive coverage of the subject matter and the well-organized framework of the volume also make it a valuable supplemental text for graduate and undergraduate courses in marine and estuarine sciences.

What makes your book stand out from its competitors?

The book describes significant developments in marine and estuarine sciences and amasses a wealth of data in hundreds of tables and figures that will have appeal and utility for scientists, students, and administrators alike. Each chapter in the book is arranged in a useful multisectional format with information presented in expository, illustrative, and tabular components.

My most significant accomplishments involve research of anthropogenic impacts on estuarine and coastal marine environments. I have conducted decades of research on a wide range of nationally significant anthropogenic problems in these environments, such as habitat loss and alteration, changing biotic communities and ecosystem dynamics, nutrient enrichment and eutrophication, hypoxia and anoxia, organic pollution, chemical contaminants, climate change, sea-level rise, overfishing, invasive species, watercraft effects, dredging and dredged-material disposal, freshwater diversions, calefaction of estuarine waters, entrainment and impingement of electric generating stations, and the effects of watershed development on coastal systems. In addition, I have examined the effects of construction and operation of industrial facilities, maintenance of shorelines and waterways, and human use of coastal space and aquatic systems. I have also studied the biology and geology of mid-ocean ridge and deep-sea hydrothermal vent systems.  All of this work has resulted in the publication of 15 scholarly books authored or edited on estuarine and marine sciences and more than 200 total career publications.

The highlight of my career has been the opportunity to work with the most accomplished coastal and marine scientists in the world. I am also greatly appreciative for the collection of awards that I have received over the past decade for research and outreach of estuarine and marine sciences. Notable in this regard are: 2009 NOAA/NERRA National Award for outstanding contributions to the National Estuarine, 2010 Graham Macmillan Award of the American Littoral Society for significant contributions to marine science and conservation, 2010 Sierra Club Award for outstanding environmental accomplishments, 2011 Pearl S. Schwartz Environmental Award of the League of Women Voters for work on New Jersey’s coastal environments, 2013 Frank Oliver Award of the New Jersey Environmental Lobby for contributions to the protection of New Jersey’s environments, and the 2017 Albert Nelson Marquis Lifetime Achievement Award for dedication to the environmental and oceanographic sciences.