CRC Press is pleased to share with you our author Q&A session with Raymond H. Hamden, author of Psychology of Terrorists: Profiling and CounterAction, 1st Edition 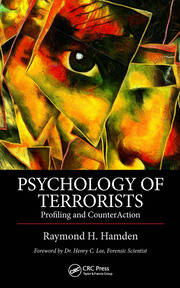 Congratulations on the publication of your book Psychology of Terrorists: Profiling and CounterAction.
What do you think are your most significant research accomplishments?
I have made several professionally practical contributions to the field of Forensic Psychology:
Is there one piece of research included in the book which surprised you or challenged your previous understanding of the topic?

Reviewing forensic reports and testimony used in criminal cases, including ‘cold cases’.  I found these may not reveal the complexity, assumptions and limitations behind the results and the examining lawyer (and ultimately the judge and jury) require this information for context and transparency.  There is also an aura of certainty around DNA evidence that investigators may be reluctant to probe.

Why is your book relevant to your field of study in the present day?
The intervention approach had added value with introducing the psychoanalytic understanding of defensive mechanisms as the basis for discovery when seeking the truth from the accused.  The response was excellent in opening a flood gate emotions and information shared with this non-judgmental connection.
Who has influenced you the most?
The prisoners and those already released, some who were falsely accused and imprisoned, contributed to the influences on this author.  Their intellect and commitment to a concept in which they believed a better work could exist.  This was met with acceptance that the author and associates were not in favor of their methods (3-Is) of Influence listeners - Impose on the community - Implement on world-wide, yet there was respect for the differences of opinions.

The rapport based approach was instrumental in opening opportunities not noted before with those accused of terrorist acts.

What first attracted you to this area of study?

Discussions within the professional communities led to an invitation to be a 1986 Visiting Fellow at the Center for International Development and Conflict Management, University of Maryland [College Park].  Here I met and concurred with global range of scholars to assess and evaluate the various components of fundamentalism and hostage situations.  Presenting before the US Senate Caucus on Terrorism and writing in the US House of Representative Committee on the Middle East were the launch to consulting in the areas of Political Psychology and later training in Forensic Psychology.

The sequel to this book is Psychology of Terrorists: Case Studies, Vol II is being compiled with examples of many men, women, and families with involvement in terrorism at innumerable levels.  The information learned and how it is gained will be discussed in the coming volume.

Meetings with people in the law enforcement arena will be featured as well. Deliberating on the needed measures for correction but most importantly, prevention of terrorist recruitment and vulnerability of youth and adult of all ages in nations around the global will be conferred.