CRC Press is pleased to introduce the new edition of Commonly Asked Questions in Thermodynamics, an indispensable resource for those in modern science and engineering disciplines from molecular science, engineering and biotechnology to astrophysics. Fully updated throughout, this edition features two new chapters focused on energy utilization and biological systems.

This edition begins by setting out the fundamentals of thermodynamics, including its basic laws and overarching principles. It provides explanations of those principles in an organized manner, using questions that arise frequently from undergraduates in the classroom as the stimulus. These early chapters explore the language of thermodynamics; the first and second laws; statistical mechanical theory; measurement of thermodynamic quantities and their relationships; phase behavior in single and multicomponent systems; electrochemistry; and chemical and biochemical reaction equilibria. The later chapters explore applications of these fundamentals to a diverse set of subjects including power generation (with and without fossil fuels) for transport, industrial and domestic use; heating; decarbonization technologies; energy storage; refrigeration; environmental pollution; and biotechnology. Data sources for the properties needed to complete thermodynamic evaluations of many processes are included.

The text is designed for readers to dip into to find an answer to a specific question where thermodynamics can provide some, if not all, of the answers, whether in the context of an undergraduate course or not. Thus its readership extends beyond conventional technical undergraduates to practicing engineers and also to the interested lay person who seeks to understand the discourse that surrounds the choice of particular technological solutions to current and future energy and material production problems.

Marc J. Assael is Emeritus Professor in Thermophysical Properties in the Chemical Engineering Department of the Aristotle University of Thessaloniki, Greece and the Editor-in-Chief of the International Journal of Thermophysics (Springer Nature).

Professor Geoffrey C. Maitland is Professor of Energy Engineering at Imperial College London and a Past President of the Institution of Chemical Engineers (2014-15).

Dr. Thomas Maskow teaches at the TUD, the University of Leipzig, the BA Sachsen University of Cooperative Education. He was elected as chairperson of the International Society for Biological Calorimetry (ISBC) between 2010 and 2012 and is guest professor at the University of Geosciences in Wuhan (China).

Professor Sir William Wakeham is is Emeritus Professor of Engineering at the University of Southampton, UK. He is a Fellow of the Royal Academy of Engineering, and has been its Senior Vice-President and International Secretary and holds the Academy’s Silver Medal for Engineering Excellence.

Professor Stefan Will is a full professor in Engineering Thermodynamics at the Department of Chemical and Bioengineering of Friedrich-Alexander University Erlangen-Nürnberg (FAU), Germany. 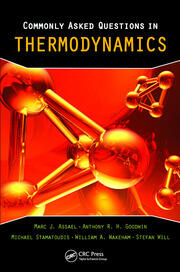