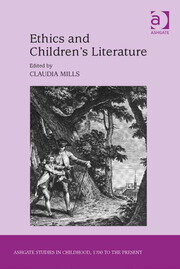 Exploring the ethical questions posed by, in, and about children’s literature, this collection examines the way texts intended for children raise questions of value, depict the moral development of their characters, and call into attention shared moral presuppositions. The essays in Part I look at various past attempts at conveying moral messages to children and interrogate their underlying assumptions. What visions of childhood were conveyed by explicit attempts to cultivate specific virtues in children? What unstated cultural assumptions were expressed by growing resistance to didacticism? How should we prepare children to respond to racism in their books and in their society? Part II takes up the ethical orientations of various classic and contemporary texts, including 'prosaic ethics' in the Hundred Acre Wood, moral discernment in Narnia, ethical recognition in the distant worlds traversed by L’Engle, and virtuous transgression in recent Anglo-American children’s literature and in the emerging children’s literature of 1960s Taiwan. Part III’s essays engage in ethical criticism of arguably problematic messages about our relationship to nonhuman animals, about war, and about prejudice. The final section considers how we respond to children’s literature with ethically focused essays exploring a range of ways in which child readers and adult authorities react to children’s literature. Even as children’s literature has evolved in opposition to its origins in didactic Sunday school tracts and moralizing fables, authors, parents, librarians, and scholars remain sensitive to the values conveyed to children through the texts they choose to share with them.

Part I The Dilemma of Didacticism: Attempts to Shape Children as Moral Beings

3 Talking to Children about Race: Children's Literature in a Segregated Era, 1930-1945 Moira Hinderer

6 A Prosaics of the Hundred Acre Wood: Ethics in A. A. Milne's Winnie the Pooh and The House at Pooh Corner  Niall Nance-Carroll

10 Lewis, Tolkien, and the Ethics of Imaginary Wars Suzanne Rahn

15 Using Children's Literature as a Spark for Ethical Discussion: Stories that Deal with Death Sara Goering

Claudia Mills is Associate Professor Emerita of Philosophy at the University of Colorado, Boulder, USA. She is the author of many books for children, most recently Zero Tolerance (Farrar, Straus & Giroux).

'Keenly analytical and critically astute, Ethics and Children’s Literature is a compelling exploration of the ethical at work in literature for the young. Each of the essays contributes a unique voice to the volume; the sensitively edited chapters blend to become a chorus resonant with the ways that ethics and children’s literature inflect one another.' Roberta Seelinger Trites, Illinois State University, USA, author of Disturbing the Universe: Power and Repression in Adolescent Literature and Literary Conceptualizations of Growth 'The volume successfully brings together a variety of approaches to studying ethics in children's literature. It conveys an important message that the quite overt manipulation to which children were subject in the past, e.g. in the segregation era, has been replaced by more subtle snares to be disentangled by critical reading.' International Research in Children's Literature '... a collection that is full of interesting perspectives ... [I] recommend this volume for the freshness of its approach to a subject that has received rather less attention than it deserves in the field of children's literature criticism.' Network