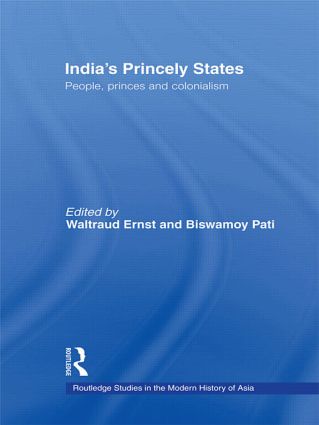 This is an invaluable work looking into new areas relating to India's princely states. Based on an abundance of rarely used archival material, the book sheds new light on diversities related to the princely states such as health policies and practices, gender issues, the states’ military contribution or the mechanisms for controlling or integrating the states.

Contributions are from international, reputable scholars, and they present historiographic, analytical and methodological approaches, placing attention to concepts, theories and sources. Inter-disciplinary in nature, this book will appeal to scholars and researchers of South Asia, studies of transnational histories, cultural and racial studies, international politics and economic history and the social history of health and medicine.

Waltraud Ernst is Reader in History at the University of Southampton, UK. She has published widely on the history of mental illness in South Asia. Her publications include Mad Tales from the Raj (1991), Race, Science and Medicine (co-edited with B.J. Harris, 1999), Plural Medicine, Tradition and Modernity (ed., 2002) and The Normal and the Abnormal (ed., 2006). She is currently completing a book on ‘Mental Illness and Colonialism’ and engaged in a collaborative research project on ‘Colonial Medicine and Indigenous Health Practices in Southern and Eastern Princely States of India, c. 1880-1960’.

Biswamoy Pati is Reader in the Department of History, Sri Venkateswara College, Delhi University, India. His research interests focus on colonial Indian social history. He is the author of Identity, Hegemony, Resistance: Towards a Social History of Conversions in Orissa, 1800-2000 (2003); Situating Social History: Orissa, 1800-1997 (2001); and Resisting Domination: Peasants, Tribals and the National Movement in Orissa, 1920-1950 (1993). He has co-edited Health, Medicine and Empire: Perspectives on Colonial India (with Mark Harrison, 2001; 2006). His edited book, The 1857 Rebellion: Debates in Indian History and Society is due for release in June 2007.