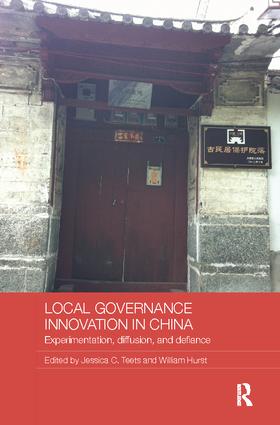 Despite a centralized formal structure, Chinese politics and policy-making have long been marked by substantial degrees of regional and local variation and experimentation. These trends have, if anything, intensified as China’s reform matures. Though often remarked upon, the politicsof policy formation, diffusion, and implementation at the subnational level have not previously been comprehensively described, let alone satisfactorily explained.

Based on extensive fieldwork, this book explores how policies diffuse across China today, the mechanisms through which local governments actually arrive at specific solutions, and the implications for China’s political development and stability in the years ahead. The chapters examine how local-level institutions solve governance challenges, such as rural development, enterprise reform, and social service provision. Focusing on diverse policy areas that include land use, state-owned enterprise reform, and house churches, the contributors all address the same overarching question: how do local policymakers innovate in each issue area to address a governance challenges and how, if at all, do these innovations diffuse into national politics.

As a study of local governance in China today, this book will appeal to both students and scholars of Chinese politics, comparative politics, governance and development studies, and also to policy-makers interested in authoritarianism and governance.

"This edited volume makes a significant contribution to a burgeoning literature on sub-national policy experimentation and diffusion in China. Bringing together nine rich and varied case studies, the volume sets out to more systematically theorize the pathways and processes of local policy innovation and diffusion, important for their potential to effect large-scale change." - Stephen Trott, Pacific Affairs: Volume 89, No. 3 – September 2016

"The book provides an insightful theoretical framework for explaining and understanding the politics of policy formulation and implementation at the subnational level in China." - Dr. Lisheng Dong, University of Glasgow, Journal of Chinese Political Science (JCPS)

is Associate Professor of Political Science at Northwestern University, USA.