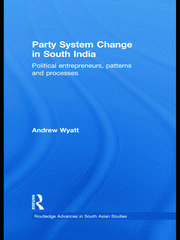 This book provides a systematic exploration of party system change. By applying the concept of political entrepreneurship and using a detailed case study of the south Indian state of Tamil Nadu, it demonstrates how party leaders can exercise their agency and drive party system change.

Recent developments in Tamil politics are taken into account in the light of the literature on party systems, achieving a classification of the party system and revealing patterns of change. The author explains the process of the change by comparing the careers of successful and failed party leaders, thus identifying the factors that enabled some political entrepreneurs to successfully found political parties and contribute to the process of party system change.

Examining issues such as regional parties, political entrepreneurship, social change, caste and religious nationalism, the book illustrates the key forces shaping contemporary Indian politics, and presents an example of how the trend toward identity politics and the rising influence of regional political parties are fashioning a new Indian polity. With a broad cross-disciplinary appeal, the book will be of interest to students of South Asian politics, comparative politics, sociology and anthropology.

Andrew Wyatt is a Senior Lecturer in Politics at the University of Bristol. He has research interests in comparative politics as well as electoral politics and political economy in India. He has co-edited The Politics of Cultural Mobilization in India and Decentring the Indian Nation.

"The book is a major contribution to the study of contemporary South Indian politics, combining a rich regional political history with an analytical narrative that simultaneously addresses central questions in the study of Indian politics more generally.  These concern, for instance, how party systems change, the complex system of linkages between national and regional politics, the impact of cultural and social change on how politics is understood and conducted, and the influence of economic/development actors on each of these processes. Wyatt's explanations are always nicely developed. An elegant and well-thought-through book." Rob Jenkins, Professor of Political Science, Hunter College and the Graduate Center, City University of New York, 2010

"Andrew Wyatt knows (and shows) that political entrepreneurs matter much more than most analyses of parties and party systems suggest. He makes imaginative use of theory without becoming its prisoner. And he tells an exotic, important story authoritatively and well." - James Manor, University of London, 2010

"Andrew Wyatt has written by far the most rigorous and persuasive account to date of the roles played by individual political entrepreneurs in shaping changes in party systems. A must read not only for students of South India but also for political scientists more generally.Wyatt's book presents a sharp and welcome challenge to institutional determinism in political studies." - Stuart Corbridge, London School of Economics, 2010

"The book is well written and engagingly argued, and makes a substantial and original contribution to the study of Indian politics." - John Harriss, Simon Fraser University, Canada, and National University of Singapore, Singapore; Contemporary South Asia, Vol. 18, No. 3, September 2010