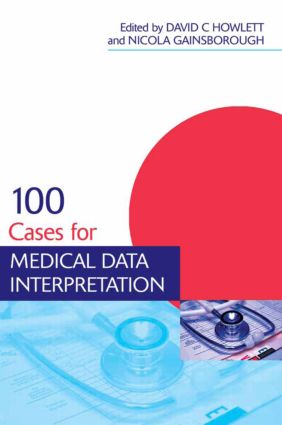 Data interpretation questions based on clinical cases are a popular means of testing medical students both during undergraduate studies and as an element of finals examinations. Written by a small team of authors with extensive teaching experience, 100 Cases in Medical Data Interpretation provides invaluable guidance from lecturers who understand from personal experience that detailed and accurate explanations are the key to successful revision.

This book presents 100 cases arranged by specialty area—radiology, clinical chemistry, haematology and cardiology—as well as a random section of miscellaneous cases. Questions accompanying each case prompt the reader to consider how the data presented might be correctly understood. A clear discussion of how the correct answer was reached, with boxed highlights and bullet lists of key points, makes this book an excellent learning aid during all stages of clinical studies, and particularly while preparing for medical finals.

Case 2: An elderly man with shortness of breath

Case 3: A woman with headache

Case 4: An elderly man with a cough

Case 5: A woman with abdominal pain

Case 7: A teenager with headache and vomiting

Case 8: A man with severe vomiting

Case 12: A man with renal failure

Case 26: A woman with cough and weight loss

Case 32: An elderly woman with shortness of breath

Case 33: An elderly woman with diabetes

Case 34: Middle-aged woman with a cough

Case 35: Man with a bloody cough

Case 36: Middle-aged man with a cough

Case 38: Elderly man with pain in the hip

Case 39: Woman with headache and vomiting

Case 43: Middle-aged woman with swelling in hands and feet

Case 49: A middle-aged man with lethargy

Case 51: An elderly woman with light-headedness

Case 52: An elderly woman with anaemia

Case 57: A teenager with unexplained bruises

Case 58: A teenager with panic attacks

Case 60: A teenager with a swollen knee

Case 96: Young woman with pain in her legs and back