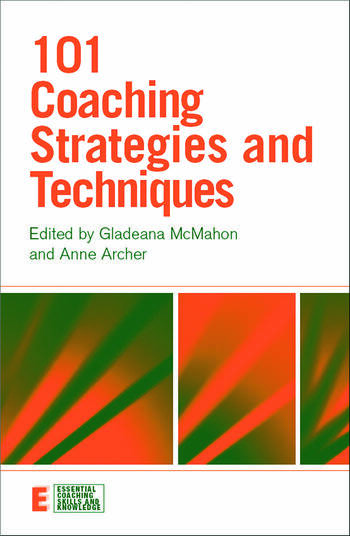 101 Coaching Strategies and Techniques provides focused, practical strategies to help the coach with their work. Each point provides a detailed explanation of the strategy together with potential pitfalls and solutions.

Contributors from a range of coaching backgrounds are brought together to cover a number of issues faced by professional coaches including:

101 Coaching Strategies and Techniques will be a handy reference tool for busy coaches; the bite-sized strategies will also provide a useful guide for those in training.

Gladeana McMahon is Fellow and Chair of the Association for Coaching, UK. Her publications include Achieving Excellence in Your Coaching Practice and Essential Skills for Setting up a Counselling or Psychotherapy Practice. Gladeana was listed as one of the UK's 'top ten coaches' in the Independent on Sunday

Anne Archer develops leadership and change capability in organisations in both the public and the private sector. She also facilitates coach training programmes, open and in-house, and provides 1:1 and group supervision. Anne works with leaders and coaches across the globe. She is Editor of the Association for Coaching bulletin and is a member of the ICF

"The book is a great list of coaching techniques and suggestions. In my opinion, the addition of therapeutic perspectives has a lot of potential for deepening the coaching process and so could provide long-lasting change for coaching clients. I expect the book to be very helpful for people working as coaches; counsellors working with EAPs or other short-term counselling might also find some of the activities useful." - Sue Lewis, Therapy Today, October 2010

"Practitioners, coaches, managers, marketers, counsellors, politicians, public figures and non-scholars will learn from this book. No prerequisites are needed. Coaches who have to train players, new employees (or teenagers) will find here some inspiration, just like young parents who have to manage a crisis."— Yves Laberge, Division of Clinical Psychology