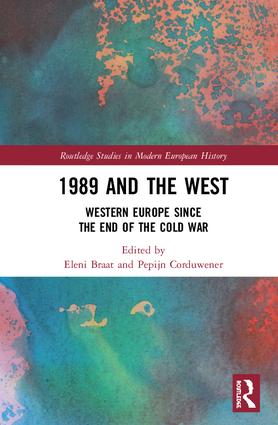 Western Europe since the End of the Cold War, 1st Edition

Back in 1989, many anticipated that the end of the Cold War would usher in the ‘end of history’ characterized by the victory of democracy and capitalism. At the thirtieth anniversary of this momentous event, this book challenges this assumption. It studies the most recent era of contemporary European history in order to analyse the impact, consequences and legacy of the end of the Cold War for Western Europe. Bringing together leading scholars on the topic, the volume answers the question of how the end of the Cold War has affected Western Europe and reveals how it accelerated and reinforced processes that shaped the fragile (geo-)political and economic order of the continent today.

In four thematic sections, the book analyses the changing position of Germany in Europe; studies the transformation of neoliberal capitalism; answers the question how Western Europe faced the geopolitical challenges after the Berlin Wall came down; and investigates the crisis of representative democracy. As such, the book provides a comprehensive and novel historical perspective on Europe since the late 1980s.

I. A New Germany in a New Europe

Ch. 1 Jacco Pekelder, Germany and Europe after 1989. The Spectre of the German Question versus the Resilience of Self-Restraint

II. Neoliberalism in and beyond the Nation State

Ch. 6 Philipp Ther, The Year 1989 and the Global Hegemony of Neoliberalism

Ch. 8 Stefan Couperus and Dora Vrhoci, A Profitable Friendship, Still? Town Twinning between Eastern and Western European Cities before and after 1989

Ch. 10 Cristina Blanco Sio-Lopez, The Future that Once Was: 1989, the EU’s Eastward Enlargement, and Democracy’s Missed Chances

Ch. 11 Laurien Crump, A Missed Opportunity for a New Europe? The End of the Cold War and its Consequences for Western European Relations with Russia

IV. Democracy between Triumph and Crisis since 1989

Ch. 13 Ido de Haan, Restrained Democracy and its Radical Alternatives after 1989: the Threefold Crisis of Democracy in the ‘Former West’

Ch. 15 Dan Stone, The Return of Fascism in Europe? Reflections on History and the Current Situation

Eleni Braat is Assistant Professor at Utrecht University, where she teaches 20th century history of international relations and secret intelligence. She specializes in state secrecy, intelligence and security services, and the political and organizational tensions they led to in 20th century Europe. She holds a Ph.D. from the European University Institute in Florence, Italy, and she has been official historian of the Dutch General Intelligence and Security Service (AIVD).

Pepijn Corduwener is Assistant Professor in Political History at Utrecht University. He is specialized in the history of democracy in 20th century Europe, with a particular focus on postwar France, Germany and Italy. He has published widely on this topic as well as on European populism. His monograph The Problem of Democracy in Postwar Europe was published by Routledge in 2017. He is currently conducting a research project on the crisis of people’s parties in Europe, funded by the Netherlands Organisation of Scientific Research.