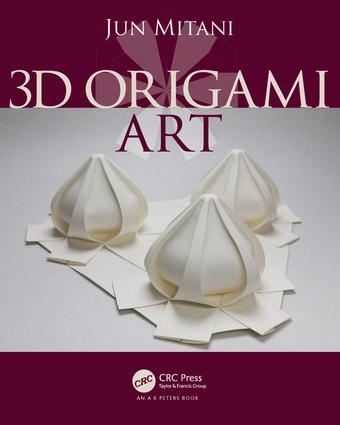 Origami—making shapes only through folding—reveals a fascinating area of geometry woven with a variety of representations. The world of origami has progressed dramatically since the advent of computer programs to perform the necessary computations for origami design.

3D Origami Art presents the design methods underlying 3D creations derived from computation. It includes numerous photos and design drawings called crease patterns, which are available for download on the author’s website. Through the book’s clear figures and descriptions, readers can easily create geometric 3D structures out of a set of lines and curves drawn on a 2D plane.

The author uses various shapes of sheets such as rectangles and regular polygons, instead of square paper, to create the origami. Many of the origami creations have a 3D structure composed of curved surfaces, and some of them have complicated forms. However, the background theory underlying all the creations is very simple. The author shows how different origami forms are designed from a common theory.

"This is a beautiful book, containing many lovely examples at the forefront of geometric origami. Readers will find the patterns both challenging and satisfying to fold, and the concepts on which they are based form a foundation for many further potential explorations."

"Ever wonder how paper artists can fold a sheet of paper into amazingly complex shapes? Then this book is for you. There aren’t many resources out there for 3D, mathematically inspired origami, and Jun Mitani gives us a whole book’s worth of fun, interesting models to help fill this gap. Geometric origami fans will love this book."

"Twist Closing" for Closing a Solid

Connecting and Tiling 3D-Pleat Type on a Plane

Making Use of Duality

Making Use of Mirror Inversion

Mirror Inversion on a Developable Surface

Relation between Sweep Locus and Shape

Relation between Living Things and Origami

Application of Origami to Industry

Jun Mitani is a professor of information and systems in the Faculty of Engineering at the University of Tsukuba. Dr. Mitani was previously a PRESTO researcher at the Japan Science and Technology Agency, a lecturer in the Department of Computer Science at the University of Tsukuba, and a postdoctoral researcher at RIKEN. His research focuses on computer graphics, including computer-aided origami design techniques. He is the author of the books Spherical Origami and 3D Magic Origami.