While there are a growing number of books based on the Toyota Production System, or lean, focused on healthcare, there are very few that detail the tools that make lean more than just a way of thinking and put the methodology into practice.

Based on Hiroyuki Hirano's classic 5 Pillars of the Visual Workplace and modeled after the Shingo Prize-winning Shopfloor Series for Lean Manufacturers, 5S for Healthcare adopts a proven reader-friendly format to impart all the information needed to understand and implement this essential lean methodology. It provides examples and cased studies based on the experiences of the principals involved with the Rona Consulting Group, who were responsible for the groundbreaking implementation of the Toyota Production System at the Virginia Mason Medical Center.

Thomas L. Jackson, JD, MBA, PhD, is the former CEO of Productivity, Inc., and Productivity Press, and a member of the influential Ford Lean Advisory Group. Tom has been a student of lean enterprise since 1988, when he copyedited Hiroyuki Hirano’s JIT Factory Revolution for Productivity Press and reworked two chapters of Yasuhiro Monden’s groundbreaking Japanese Management Accounting. Looking at pictures of Japanese factories and reading about how differently the Japanese count their money, Tom became so fanatical about lean that he left his comfortable position as a professor of business at the University of Vermont to start his own lean consulting company—in Malaysia! There, he learned that the powerful techniques of lean enterprise— JIT, SMED, TPM, and kanban—were only half of the story of Toyota’s great success. The other half of the story was hoshin kanri (a.k.a. the "balanced scorecard") and a revolution in the structure of modern business organization.

In 2005, Tom started applying Toyota’s operational and management methods in healthcare in a small rural clinic in Seward, Alaska. In 2008, Tom decided to trade his Levi’s Dockers for a pair of black scrubs and joined Mike Rona, former president of Seattle’s Virginia Mason Medical Center, as a partner in the Rona Consulting Group, where he and Mike are "transforming healthcare and pursuing perfection." In 2007, Tom was awarded a Shingo Prize for his book, Hoshin Kanri for the Lean Enterprise. In 2009, Tom was appointed Clinical Associate Professor in the Department of Health Services of the University of Washington’s School of Public Health. 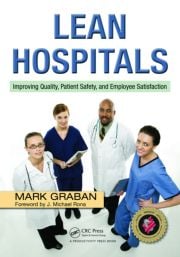