A Brief History of Pharmacy
Humanity's Search for Wellness 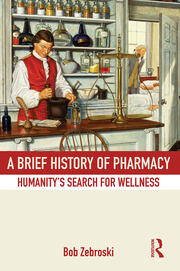 A Brief History of Pharmacy: Humanity's Search for Wellness

Pharmacy has become an integral part of our lives. Nearly half of all 300 million Americans take at least one prescription drug daily, accounting for $250 billion per year in sales in the US alone. And this number doesn't even include the over-the-counter medications or health aids that are taken. How did this practice become such an essential part of our lives and our health?

A Brief History of Pharmacy: Humanity's Search for Wellness aims to answer that question. As this short overview of the practice shows, the search for well-being through the ingestion or application of natural products and artificially derived compounds is as old as humanity itself. From the Mesopotamians to the corner drug store, Bob Zebroski describes how treatments were sought, highlights some of the main victories of each time period, and shows how we came to be people who rely on drugs to feel better, to live longer, and look younger. This accessible survey of pharmaceutical history is essential reading for all students of pharmacy.

Introduction: The Essentials of Pharmacy

Chapter 1: Prehistoric Pharmacy: aka From Stones and Bones to Weeds and Seeds

Chapter 2: Ancient Pharmacy: Mesopotamia: The First of the River Civilizations

Chapter 6: Pharmacy in Ancient Greece and Rome during the Classical Age

Chapter 9: Pharmacy during the European Renaissance and Early Modern Era

Chapter 10: 18th and 19th Century Pharmacy: From Apothecary to Chemist to Pharmacist

Chapter 12: The Era of Alternative and Patent Medicine

Chapter 13: US Pharmacy Organizes and Promotes a New Vision for the Practice of Pharmacy

Chapter 15: The Origin and Growth of the Pharmaceutical Industry

Chapter 16: The Emergence of the Corner Drugstore: An American Institution

Chapter 17: From Penicillin to Viagra: The Drugs We Can't Live Without

Bob Zebroski is Professor of History and Chairperson of the Liberal Arts Department at the St. Louis College of Pharmacy, one of the largest and oldest schools of pharmacy in the US, which just celebrated its sesquicentennial anniversary.

"[A Brief History of Pharmacy] is clearly well researched, and the writing style is direct and informative.  Zebroski (St. Louis College of Pharmacy) covers the entire history of pharmacy from prehistory until today in 250 data-filled pages.  Each chapter ends with a summary, a listing of key terminology, review questions (sample test questions), and notes.  The author provides a wealth of information on the topic...Summing Up: Recommended."
- I. Richman, Pennsylvania State University, Harrisburg Campus, in CHOICE