A Citizen's Guide to Presidential Nominations
The Competition for Leadership 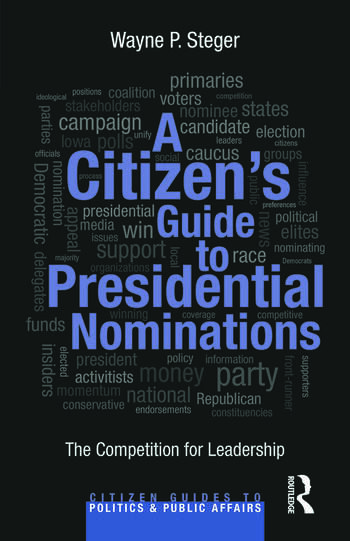 A Citizen's Guide to Presidential Nominations: The Competition for Leadership

Political scientist Wayne Steger defines the nominating system as a tension between an "insider game" and an "outsider game." He explains how candidates must appeal to a broad spectrum of elected and party officials, political activists, and aligned groups in order to form a winning coalition within their party, which changes over time. Either these party insiders unify early behind a candidate, effectively deciding the nominee before anyone casts a vote, or they are divided and the nomination is determined by citizens voting in the caucuses and primaries. Steger portrays how shifts in party unity and the participation of core party constituencies affect the options presented to voters. Amidst all this, the candidate still matters. Primaries with one strong candidate look much different than those with a field of weaker ones. By clearly addressing the key issues, past and present, of presidential nominations, Steger’s guide will be informative, relevant, and accessible for students and general readers alike.

Part 1: Introduction and Rules of the Game  1. An Introduction to Presidential Nominations  2. An Evolving Nomination Process  Part 2: Mechanics of the Game  3. Party Stakeholders – the Insider Game 4. The Changing Money Game  5. Mass- and Micro- Media Campaigns  6. Competition in Post-Reform Presidential Nominations  7. Collusion or Competition During the Invisible Primary  Part 3: Why Some Nominations are Decided Before and Some During the Primaries  8. Political Party Unity: Long- and Short-Term Variations  9. Candidates: Opportunism, Competition, and Change  10. Before, During, and After the Primaries Index

Wayne P. Steger is Professor of Political Science at DePaul University. He is a former editor of the Journal of Political Marketing and co-editor of Campaigns and Political Marketing. His work includes studies on agenda-setting, media coverage of campaigns, and marketing in political campaigns. His recent work focuses on party elites, coalition formation, and candidate decision-making.

Using comparative data on candidate viability from 1976 to 2012, Wayne Steger demonstrates which presidential nominations are effectively won during the invisible primary stage, through the informal coordination of the party elite, and which nominations are determined by voter support in the primaries and caucuses. Through this analysis, Steger illuminates how presidential nomination politics has changed over recent decades and across the two parties.—Barbara Norrander, University of Arizona

Steger's A Citizen's Guide to Presidential Nominations: The Competition for Leadership is more about the subtitle than the title. Steger (DePaul Univ.) writes less about rules, process, and schedule than about competition within parties and control of party coalitions. Average citizens may, in fact, be somewhat confused by Steger's use of the Herfindahl-Hirschman Index for measuring competition, especially with little to no explanation of how it is derived, particularly for use in the context of presidential nominations. However, the overall discussion of different contexts for nomination races whether there is an incumbent in one party or the other or political leaders have coalesced around a single candidate contributes to the understanding of the process by average citizens. A Citizen's Guide would work well as a secondary reading in courses on the presidency or campaigns and elections, helping students gain an understanding of the dynamics of the process. --Jim Twombly, Elmira College