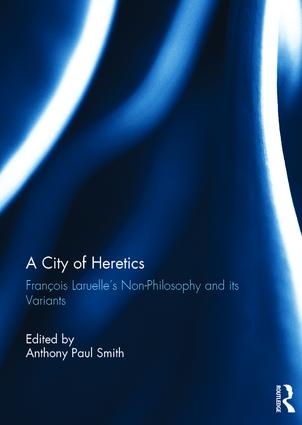 A City of Heretics

François Laruelle has been developing his project of non-philosophy since the 1970s. Throughout this time he has aimed at nothing less than the discovery and development of a new form of thinking that draws its material from philosophy and related disciplines, but uses them in inventive new ways that are seen as heretical by standard philosophical approaches. The contributions to this volume highlight Laruelle’s own distinctive approach to the history of thought and bring together researchers in the Anglophone and Francophone world who have taken up the project of non-philosophy in their own way, developing new heresies, sometimes even in relation to non-philosophy itself. The contributions here show the scope of non-philosophy with essays on gender, science, religion, politics, animals, and the history of philosophy. They are all brought together, not in a city of intellectuals bound together by law, but within a city of heretics bound together only by their status as stranger. This book was originally published as a special issue of Angelaki.

4. The Theoretical Pragmatics of Non-Philosophy: Explicating Laruelle’s Suspension of the Principle of Sufficient Philosophy with Brandom’s Meaning-Use Diagrams Rocco Gangle

7. Notes on the Axiomatic of the Desert Eugene Thacker

9. Violence: The Indispensable Condition of the Law (and the Political) Katerina Kolozova

10. The Animal Line: On the Possibility of a "Laruellean" Non-Human Philosophy John O’Maoilearca

Anthony Paul Smith is an Assistant Professor of Philosophical Theology in the Department of Religion at La Salle University, Philadelphia, USA. He is the author of A Non-Philosophical Theory of Nature: Ecologies of Thought (2013), and François Laruelle’s Principles of Non-Philosophy: A Critical Introduction and Guide (2016). He is also the translator of some of Laruelle’s work.