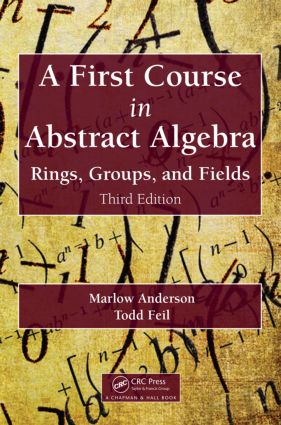 A First Course in Abstract Algebra

Like its popular predecessors, A First Course in Abstract Algebra: Rings, Groups, and Fields, Third Edition develops ring theory first by drawing on students’ familiarity with integers and polynomials. This unique approach motivates students in the study of abstract algebra and helps them understand the power of abstraction. The authors introduce groups later on using examples of symmetries of figures in the plane and space as well as permutations.

New to the Third Edition

The text includes straightforward exercises within each chapter for students to quickly verify facts, warm-up exercises following the chapter that test fundamental comprehension, and regular exercises concluding the chapter that consist of computational and supply-the-proof problems. Historical remarks discuss the history of algebra to underscore certain pedagogical points. Each section also provides a synopsis that presents important definitions and theorems, allowing students to verify the major topics from the section.

"I am a fan of the rings-first approach to algebra, agreeing with the authors that students’ familiarity with the integers and with polynomials renders rings more intuitive and accessible than groups. But this book has many other virtues besides presenting the material in this order. For example, each section is preceded and followed by short sections that try to put the material into a broader context. … This is definitely a book worth considering for textbook adoption."

"I was quickly won over by the book … . The book is very complete, containing more than enough material for a two semester course in undergraduate abstract algebra … . Even though there was a great deal of material presented, I found the book to be very well organized. … There are a lot of things that I like about this book. … [It is] well written and will help students to see the big picture. … All in all it seems that a lot of thought went into this book, resulting in a comprehensive, well-written, readable book for undergraduates first learning abstract algebra."

"A remarkable feature of the book is that it starts first with the concept of a ring, while groups are introduced later. The reason of that is that students are usually more familiar with various number domains rather than the mappings and matrices. There is a huge number of examples in the book … . The book contains a lot of nice exercises of various degrees of difficulty so that it can also be used as a practice book."

Section I in a Nutshell

Polynomials over a Field

Section II in a Nutshell

The Isomorphism Theorem for Rings

Section III in a Nutshell

Section IV in a Nutshell

The Isomorphism Theorem for Groups

Section V in a Nutshell

Section VI in a Nutshell

Quadratic Extensions of the Integers

Section VII in a Nutshell

Constructions with Compass and Straightedge

The Impossibility of Certain Constructions

Section VIII in a Nutshell

Section IX in a Nutshell

The Fundamental Theorem of Galois Theory

Section X in a Nutshell