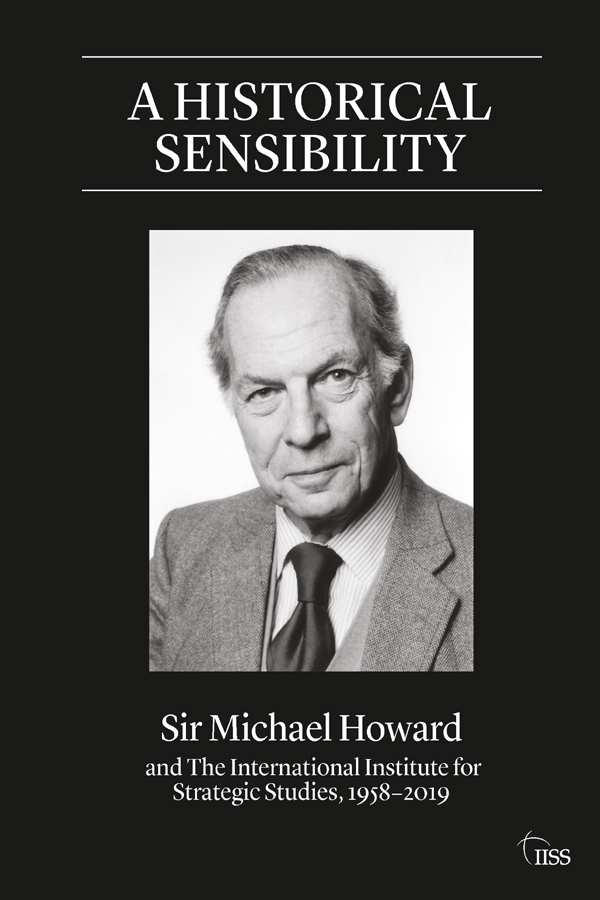 With the death of Professor Sir Michael Howard, The International Institute for Strategic Studies (IISS) lost not only its president emeritus but the last of its founders and intellectual parents. The foremost military historian of his generation, Sir Michael embodied and epitomised a historical sensibility that informed all his writing. He will forever remain an icon not only for historians, but for all those who acknowledge the indispensability of history and the historical sensibility for any true understanding of present events.

In tribute to Sir Michael and in celebration of his life and work, this Adelphi book collects a selection of his remarks and writings for IISS publications over six decades, as well as previously unprinted material. Through this collection, these works will reach a new generation of readers and be made more accessible to those fortunate enough to have read them already. They illustrate Sir Michael’s role in the Institute’s creation and his abiding presence in its evolving intellectual life, and serve as a historical document, tracing the development of strategic thought and preoccupations from the 1950s to the recent past. In addition to their historical value, Sir Michael’s conclusions retain their immediacy and power. This book is therefore of direct relevance to anyone interested in contemporary events: whether the professional analyst, the student of international relations or the general reader.

‘This wonderful collection, containing pieces written by Sir Michael Howard over 60 years, will be enjoyed by his, and the Institute’s, many friends and admirers. Here will be found many reminders, written with Michael’s customary lucidity, of the big issues of the post-war period as they were seen at the time. In addition to a fascinating interview conducted not long before his death about the origins of the Institute, there are obituaries of many of the key and now too often forgotten figures of those early years.’-- Sir Lawrence Freedman, Emeritus Professor of War Studies, King’s College London

‘Sir Michael’s exploration of policy judgement by fusing politics, strategy, history, ethics, and technology in the nuclear age is increasingly relevant in this complex age of artificial intelligence. His interdisciplinary approach continues to be a guide as we work to synthesize and solve the challenges presented by rapid technological advancements. The pieces contained here show both the continued relevance of his work, and his commitment to studying military history properly, in "depth," in "width," and in "context."’-- Dr Yoichi Funabashi, Chairman of Asia Pacific Initiative

‘In an era of instant analysis and social media polemics, Sir Michael Howard’s depth of understanding, erudition and beautifully crafted prose serve as a welcome reminder that there exists another, better, way of gauging the forces of history and strategy. These are the writings of a man with rapier-sharp wit who speaks of war as someone with first-hand experience.’-- Professor François Heisbourg, Senior Advisor for Europe and former Chairman, IISS

1. An interview with Sir Michael Howard

2. Present at the Creation

6. Letter to the Editor

9. Book Reviews: Neither Liberty nor Safety: A Hard Look at US Military Policy and Strategy

13. Book Reviews: The Roots of War: The Men and Institutions Behind US Foreign Policy

16. Letter to the Editor

17. Book Reviews: Offense and Defense in the International System

19. Deterrence, Consensus and Reassurance in the Defence of Europe

23. The remaking of Europe

26. Lessons of the Cold War

27. When Are Wars Decisive?

Professor Sir Michael Eliot Howard OM CH CBE MC FBA FRHistS (1922–2019) was a co-founder of The International Institute for Strategic Studies (IISS) and latterly its president emeritus. Decorated for bravery in the Second World War, he served as Chichele Professor of the History of War and the Regius Professor of Modern History at the University of Oxford; Robert A Lovett Professor of Military and Naval History at Yale University; and was the founder of the Department of War Studies at King’s College London.

Six books are published each year. They provide rigorous analysis of contemporary strategic and defence topics that is useful to politicians and diplomats, as well as academic researchers, foreign-affairs analysts, defence commentators and journalists.