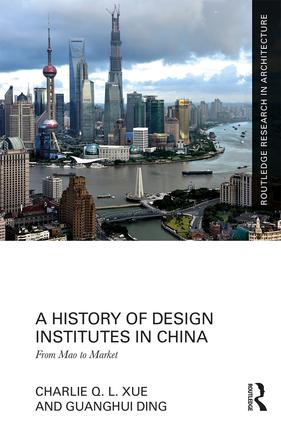 A History of Design Institutes in China

From Mao to Market, 1st Edition

A History of Design Institutes in China examines the intricate relationship between design institutes, the state, and, in later periods, the market economy through a carefully situated discussion of significant theoretical and historical issues including socialist utopia, collective and individual design, structural transformation, and architectural exportation, amongst others. It shows how, over the past six decades, China’s design institutes have served the state’s strategy for socialist construction and urbanisation to create socioeconomic and cultural value. Through first-hand research, authors Xue and Ding reveal how the tensions between pragmatism, creativity, collaboration, and resistance have played a crucial role in defining architectural production.

Appealing to academics, researchers, and graduate students, this book provides a much-needed contribution to the discourse on architectural history, building practices, and policymaking in contemporary China.

"This account of the history of design institutes in China from 1950 to 2015 fills an enormous gap in our previous knowledge of contemporary Chinese architecture. Charlie Xue and Guanghui Ding inform us through their prodigious study of the remarkable scope of the state-backed Chinese design institutes which first emerged with the foundation of the People's Republic of China in 1949. In recent years these design offices have transcended their initial rather bureaucratic character by being reorganized into semi-independent design studios led by talented architects such as Cui Kai and Li Xinggang of the China Design Group, or the architects of the He Jingtang studio of the South China Design Institute, these last being responsible for the expansion of the Nanjing Massacre memorial hall in 2008. The authors proceed to show how the prowess of these design institutes have been an integral part of the exportation of modern Chinese culture to developing countries, above all in Africa and South East Asia."

"The explosion of scholarship about modern Chinese architecture over the past decade has been remarkable, and is set to expand further. Nonetheless, it has been hard to get a sense from the outside of the key role played by the state-run design institutes. Now, in this comprehensive and fascinating account by Charlie Xue and Guanghui Ding, we can read of their creation under 1950s Maoist Communism, their liberalisation after Deng Xiaoping's 'Open Door' policy, and the complex situation today of major design institutes being run by prestigious architectural schools like Tongji University and Tsinghua University, or of design-focussed 'boutique' practices flourishing under the umbrella of vast commercial institutes."

Guanghui Ding teaches architecture at Beijing University of Civil Engineering and Architecture, China. His book Constructing a Place of Critical Architecture in China was published by Routledge in 2016. His articles have been published by Architectural Research Quarterly, Habitat International, and Journal of the Society of Architectural Historians. Ding’s research focuses on the history, theory, and criticism of modern Chinese architecture. Based in Beijing, he practices architecture both independently and collaboratively.