A History of Forensic Science
British beginnings in the twentieth century 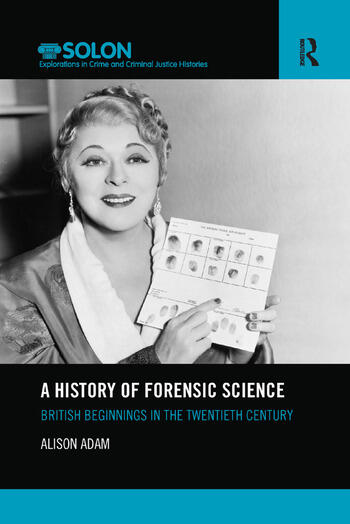 A History of Forensic Science: British beginnings in the twentieth century

How and when did forensic science originate in the UK? This question demands our attention because our understanding of present-day forensic science is vastly enriched through gaining an appreciation of what went before. A History of Forensic Science is the first book to consider the wide spectrum of influences which went into creating the discipline in Britain in the first part of the twentieth century.

This book offers a history of the development of forensic sciences, centred on the UK, but with consideration of continental and colonial influences, from around 1880 to approximately 1940. This period was central to the formation of a separate discipline of forensic science with a distinct professional identity and this book charts the strategies of the new forensic scientists to gain an authoritative voice in the courtroom and to forge a professional identity in the space between forensic medicine, scientific policing, and independent expert witnessing. In so doing, it improves our understanding of how forensic science developed as it did.

This book is essential reading for academics and students engaged in the study of criminology, the history of forensic science, science and technology studies and the history of policing.

Alison Adam is Professor of Science, Technology and Society at Sheffield Hallam University. She is the author of Artificial Knowing: Gender and the Thinking Machine and Gender, Ethics and Information Technology.

"This is an important and much-needed monograph, which offers the first exhaustive attempt to deal with the development of forensic science in late nineteenth and early twentieth-century Britain. It examines forensic science in an interdisciplinary, and broad-ranging, manner to establish the way in which it developed to reflect the needs of the courtroom and the police. It also vitally establishes how its development was presented to the public in the literature of the day."

"The consumer of this book is in for rich fare. Ranging from the idea of the "fact" in law and science, to the rhetorical influence of Sherlock Holmes, to disputes over an in-house police forensic laboratory for London's police in the 1930s, this book ably compounds interpretations of law science and culture to create a new understanding of scientific criminology. It is an excellent case study in scholarly science studies. You will also watch television crime drama quite differently after reading this book."

"This carefully researched book will appeal to historians of crime, policing and criminology, not just those of us interested in the history of forensic medicine and science. Its main strength lies in its skilful weaving of the multiple overlapping trajectories – scientific, medical, political, legal and even literary – from which forensic science emerged as a recognisably "scientific" profession."

Katherine Watson, Senior Lecturer in the History of Medicine since 1500, Oxford Brookes University

"Lucidly written, based on extensive arhival research, and rigorously conceptualised, Adam's book paints a vivid picture of forensic science in the first half of the twentieth century as well as the wider culture in which it was embedded. I strongly recommend this book, not least for forensic scholars but also for those teaching and researching cultures of science and literature."

"Adam provides an engaging narrative on the development of forensic science in England, which will be palatable to both academic and general readers. The book is likely to have a broad circulation and become influential in future popular accounts of the history of forensics."

'The value in Adam’s account lies in its successful synthesis of an eclectic range of sources into an accessible narrative. As such it succeeds for its primary audience – interested readers seeking a way of contextualising our forensics-saturated scientific, legal, and media landscapes.'

"This monograph is essential reading for academics and students engaged in the study of criminology, the history of forensic science, science and technology studies, and the history of policing, and I would recommend this publication for inclusion in any professional library as a significant reference for students and practitioners."