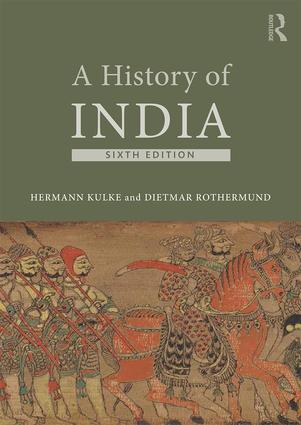 A History of India

Presenting the grand sweep of Indian history from antiquity to the present, A History of India is a detailed and authoritative account of the major political, economic, social and cultural forces that have shaped the history of the Indian subcontinent.

Hermann Kulke and Dietmar Rothermund provide a comprehensive overview of the structural pattern of Indian history, covering each historical period in equal depth. Fully revised throughout, the sixth edition of this highly accessible book has been brought up to date with analysis of recent events such as the 2014 election and its consequences, and includes more discussion of subjects such as caste and gender, Islam, foreign relations, partition, and the press and television.

This new edition contains an updated chronology of key events and a useful glossary of Indian terms, and is highly illustrated with maps and photographs. Supplemented by a companion website (www.routledge.com/cw/kulke), it is a valuable resource for students of Indian history.

"This book is one of the few available examples of its kind that succeeds in presenting a broad scale approach to India's complex histories. It achieves this while combining a useful chronological framework with key themes covering not just political events, but also economic contexts, constitutional reform, and cultural transformations. In this sense it is of enormous value as both an introduction to India and as a reference point for those revisiting its politics, culture, society and economy."

List of illustrations. Preface. Acknowledgements. Introduction: History and the Environment. 1. Early Civilisations of the Northwest 2. The Great Ancient Empires 3. The Regional Kingdoms of Early Medieval India 4. Religious Communities and Military Feudalism in the late Middle Ages 5. The Rise and Fall of the Mughal Empire 6. The Period of Colonial Rule 7. The Freedom Movement and the Partition of India 8. The Republic. Perspectives. Glossary of Indian terms. Chronology. Bibliography. Index.

Hermann Kulke is Professor Emeritus of Asian History at the University of Kiel. He is the author of Kings and Cults: State Formation and Legitimation in India and Southeast Asia (1993) and editor of The State in India 1000-1700 (1995). In 2010 he was awarded the the order of 'Padma Shri' by the Indian government.

Dietmar Rothermund is Professor Emeritus of History at the South Asian Institute, University of Heidelberg. His books include Contemporary India: Political, Economic and Social Developments since 1947 (2012), India: The Rise of an Asian Giant (2008), The Routledge Companion to Decolonization (2006), The Global Impact of the Great Depression, 1929-1939 (1996) and India in the Great Depression (1992).