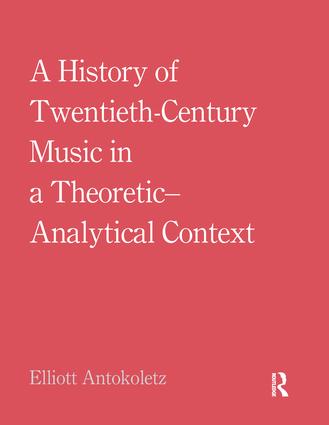 A History of Twentieth-Century Music in a Theoretic-Analytical Context

A History of Twentieth-Century Music in a Theoretic-Analytical Context is an integrated account of the genres and concepts of twentieth-century art music, organized topically according to aesthetic, stylistic, technical, and geographic categories, and set within the larger political, social, economic, and cultural framework. While the organization is topical, it is historical within that framework.

Musical issues interwoven with political, cultural, and social conditions have had a significant impact on the course of twentieth-century musical tendencies and styles. The goal of this book is to provide a theoretic-analytical basis that will appeal to those instructors who want to incorporate into student learning an analysis of the musical works that have reflected cultural influences on the major musical phenomena of the twentieth century. Focusing on the wide variety of theoretical issues spawned by twentieth-century music, A History of Twentieth-Century Music in a Theoretic-Analytical Context reflects the theoretical/analytical essence of musical structure and design.

"With this book, Antokoletz (Univ. of Texas, Austin) aims to provide a more in-depth application of musical analysis to 20th-century music than afforded by other current music histories…Advanced students of music history or performance will benefit from the book…Summing Up: Recommended." - M. Dineen, University of Ottawa, School of Music, CHOICE, April 2014

Part 1: Music to the Late 1940s 1. The Vienna of Freud: Toward Expressionism and the transformation of chromatic tonality 2. Vienna Schoenberg circle: Expressionism and free atonality 3. Schoenberg’s music societies, World War I, and evolution of the twelve-tone method 4. Musical reactions to the ultrachromaticism of the Wagner-Strauss period: Rise of national styles 5. Toward synthesis of divergent folk- and art-music sources in Eastern Europe 6. Cultural identity and cosmopolitan developments in European music 7. New musical sources and aesthetics in the United States 8. Search for cultural identity in Latin America 9. Rise of neoclassicism in France: The Cocteau-Satie era and "Les Six" 10. Stravinsky in Switzerland and Paris (1914-1939): The neoclassical style 11. Neotonality and Gebrauchsmusik in Germany 12. The music of Soviet composers 13. Color, noise, and new sonorities 14. Early developments of the twelve-tone system beyond Schoenberg, Berg, and Webern Part 2: Music Since the Mid 1940s 15. Total serialization in Europe 16. Varied approaches to the twelve-tone principle and rhythmic formulization in the United States 17. Twelve-tone tonality 18. Musique concrète and electronic music 19. Aleatory—Chance, improvisation, open form—and Minimalist Music 20. Synthesis of national and other earlier trends in Europe 21. Synthesis of national and other earlier trends in the United States 22. Latin American Composers at home and abroad: Synthesis of national and other earlier trends 23. Synthesis of East and West in Eastern Asia

Elliott Antokoletz is Professor of Musicology at the Sarah and Ernest Butler School of Music at the University of Texas at Austin.