A History of the English Poor Law
Volume III 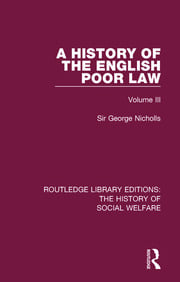 A History of the English Poor Law: Volume III

First published in 1854, this comprehensive work charts over three volumes the history of poor relief in England from the Saxon period through to the establishment of the Poor Law Amendment Act in 1834 and its reception. This edition, updated in 1898, also includes a biography of the author, Sir George Nicholls. Volume III examines poor relief from 1834 to 1898.

This set of books will be of interest to those studying the history of the British welfare state and social policy.

Part the First: From the passing of the Poor Law Amendment Act, 1834, to Dissolution of the Commission in 1847; 1. The Theory of a Poor Law 2. The Origin of the Ideas contained in the Report of 1832-34 3. The Royal Commission of Inquiry 4. The Royal Commission – continued 5. The Preparation of the Bill 6. The Passing of the Bill 7. The Carrying Out of the Act 8. The Work of the Assistant Commissioners 9. The Absorption of a Surplus Population 10. The Absorption of a Surplus Population – continued 11. The Opposition to the Act in Town and Country 12. Political and Other Opposition 13. The Commissioner’s Defence – The Continuance Report 14. The Proceedings of the Commission till its Dissolution in 1847; Part the Second: Questions Reserved for Separate Treatment; 15. Gilbert and Local Acts 16. Settlement 17. Vagrancy 18. The Cotton Famine and the Relief of the Able-Bodied 19. The Education of Pauper Children 20. The Incidence and the Rate of its Effect on Administration; Part the Third: The Authority of the Central Board Established, and the Present Attitude of Public Opinion; 21. The Consolidation of the Authority of the Central Board 22. Dispauperisation 23. Dispauperisation – continued; Appendix; Index