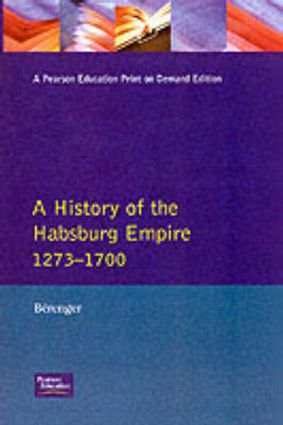 The first part of a two-volume history of the Habsburg Empire from its medieval origins to its dismemberment in the First World War.

This important volume (which is self-contained) meets a long-felt need for a systematic survey in English of the Habsburgs and their lands in the late medieval and early modern periods. It is primarily concerned with the Habsburg territories in central and northern Europe, but the history of the Spanish Habsburgs in Spain and the Netherlands is also covered. The book, like the Habsburgs themselves, deals with an immense range of lands and peoples: clear, balanced, and authoritative, it is a remarkable feat of synthethis and exposition.

List of maps and Genealogical tables. Translator's Note. Foreword. Introduction. 1. The origins. 2. The Early history of Austria and its neighbouring lands. 3. The acquisition of Austria (1278). 4. The period of establishment (1291-1439). 5. The Hussite revolution and its consequences. 6. The strengthening of the power of the nobility.

17. Philip II, head of the House of Habsburg (1556-98). 18. Catholic reformation or Counter Reformation. 19. Rudolf II (1576-1611): the triumph of Prague. 20. Ferdinand II and the Thrity Years War. 21. The Peace of Prague to the Peace of Westphalia (1635-48). 22. The task of reconstruction. 23. The Counter-Reformation in the 17th Century. 24. The re-birth of the Turkish peril and the Siege of Vienna. 25. Baroque Austria. Chronology. Glossary of German terms. Guide to further reading. Bibliography. maps and genealogical tables. Index.