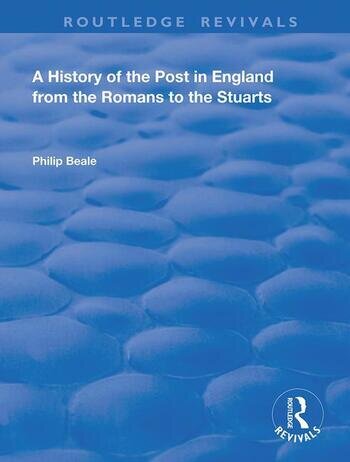 This book was originally published in 1998. From Roman times until this century the business of government has been largely carried out by the writing of letters, either in the form of instructions or of authorisations to deliver information orally. These documents were addressed to the recipient and authenticated by a seal or signature, often having a greeting and a personal conclusion. The messengers who took them also carried copies of laws and regulations, summonses to courts and whatever else was needed for the administration of the country. Without a means of speedy delivery to all concerned there could be no effective government. Separate postal services developed to meet the needs of nobles, the church, merchants, towns and the public. This book discusses three meanings of the word 'post’: the letters, those who carried them, and the means of distribution. It shows that there is some continuity from Roman times and that the postal service established throughout England after the conquest of 1066 continued until 1635 when it was officially extended to the public, thus starting its amalgamation with the other services.

1. From the Romans to the Norman Conquest.  2. The Royal Mail in the Middle Ages.  3. Medieval Highways and Travellers.  4. The Medieval and Tudor Church: Writs, Letters and Messengers.  5. Medieval Towns: Correspondence and Messengers.  6. Fifteenth-Century Letters.  7. The Carriers from the Conquest to the Stuarts.  8. The Organisation of the Tudor Post at Home and Abroad.  9. Carrying the Tudor Mail.  10. Tudor Roads and Postal Routes.  11. Sixteenth-Century Letters.  12. The Organisation of a National Postal Service.  Appendices.  1. Books and Articles on the English Post before 1635.  2. Sir Brian Tuke's Letter to Thomas Cromwell, 17 August 1533.  3. Viscount Montague's Secretariat, 1595.  4. Examples of Costs of Subsidised Tudor and Stuart Postal Routes.  5. Postal Accounts from June 1621 to May 1632.

’Philip Beale is to be congratulated on this fascinating history of the English posts up to 1635. This will be the standard work on the subject for many years to come and can be thoroughly recommended to all readers.’ Journal of the Royal Philatelic Society '’...extremely well-researched...a major contribution to a hitherto rather neglected aspect of English socio-economic history.'’ British Philatelic Bulletin, Vol. 36, No. 5 ’...a thoroughtly enjoyable journey from Roman to Stuart times. His research is meticulous and not only illustrates how the postal service developed, but en route creates an intriguing social history...The chapter on Tudor roads and postal routes is exceptional...this is a book that keeps one turning the page, keen to get an insight not only into the English post, but also into the lives of the many users of the service.’ Antiquaries Journal, vol. 80 '... assured and learned.' English Historical Review