A History of the World's Religions 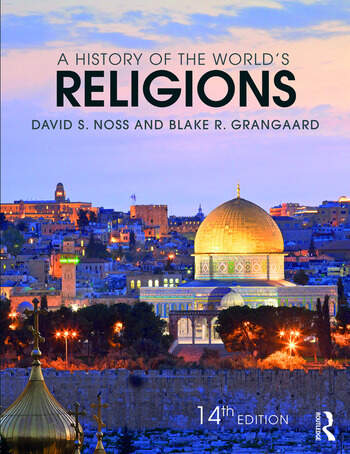 A History of the World's Religions

A History of the World's Religions bridges the interval between the founding of religions and their present state, and gives students an accurate look at the religions of the world by including descriptive and interpretive details from original source materials. Refined by over forty years of dialogue and correspondence with religious experts and practitioners around the world, A History of the World's Religions is widely regarded as the hallmark of scholarship, fairness, and accuracy in its field. It is also the most thorough yet manageable history of world religion available in a single volume. A History of the World’s Religions examines the following topics:

This fourteenth edition is fully updated throughout with new images and inset text boxes to help guide students and instructors. Complete with figures, timelines and maps, this is an ideal resource for anyone wanting an accessible and comprehensive introduction to the world’s religions.

Part 1 Some Primal and Bygone Religions

1: Religion in Prehistoric and Primal Cultures

2: Bygone Religions That Have Left Their Mark on the West

Part 2 The Religions of South Asia

3: Early Hinduism: The Passage from Ritual Sacrifice to Mystical Union

4: Later Hinduism: Religion as the Determinant of Social Behaviour

5: Jainism: A Study in Asceticism

6: Buddhism in Its First Phase: Moderation in World Renunciation

7: The Religious Developments of Buddhism: Diversity in Paths to Nirvana

8: Sikhism: A Study in Syncretism

Part 3 The Religions of East Asia

10: Confucius and Confucianism: A Study in Optimistic Humanism

Part 4 The Religions of the Middle East

12: Zoroastrianism: A Religion Based on Ethical Dualism

13: Judaism in Its Early Phases: From Hebrew Origins to the Exile

14: The Religious Developments of Judaism

15: Christianity in Its Opening Phase: The Worlds and Work of Jesus in Apostolic Perspective

16: The Religious Development of Christianity

17: Islam: The Religion of Submission to God: Beginnings

18: The Shīʿah Alternative and Regional Developments

David S. Noss taught in the Religion and Philosophy Department of Heidelberg College from 1950 until his retirement in 1989, although he continued teaching students and advising faculty until his passing in 2010.

Over the last few decades, the professional study of religion has fetishized difference and denied sameness. It has also chosen to focus on the local and to ignore the global. As a field, we have allergically avoided the "big picture." But not here. Noss and Grangaard have given us a marvelous text on precisely this big picture and this more generous view of human history. Jeffrey J. Kripal holds the J. Newton Rayzor Chair in Philosophy and Religious Thought at Rice University, USA, and is author of Comparing Religions: Coming to Terms, with Ata Anzali, Andrea R. Jain, and Erin Prophet.

Having utilized many editions of A History of World Religions in undergraduate Religious Studies classes, I eagerly await each new edition. The updates, glossaries and encyclopedic information are invaluable. I won't assign any other textbook but this one! Amy Fisher, Interfaith Center, Suffolk University, USA.

A History of the World's Religions is particularly valuable in that it traces the historical evolution of the world's religions. It also answers three crucial existential questions: What do adherents of each religious tradition think?  What do they feel? And how do they act? I have yet to find a better resource to introduce the major world religions. Dr. Mark Etling, School for Professional Studies, Saint Louis University, USA.