A Matter of Discourse
Community and Communication in Contemporary Philosophies 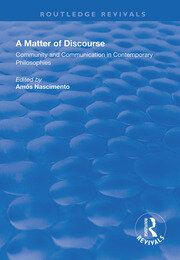 A Matter of Discourse: Community and Communication in Contemporary Philosophies

First published in 1998. The emphasis upon differences, plurality and multiculturalism has led to an outpouring of information that has been interpreted by theories such as pragmatism, communitarianism, feminism, postmodern discourse and liberation ethics. Up to now, these issues have been seen as particular and external objects for theoretical discussion. This book goes to the heart of the matter and opens promising avenues for further philosophical reflection on these topics. Having the conception of communication in discourse theory as point of departure, scholars of distinct philosophical backgrounds move in and out of different contexts to offer a first-hand and in-depth account of the above positions in their dialogue with discourse theory. By establishing a web, they connect distinct issues that have been dealt with only separately thus far, without losing sight of differences. In the end, A Matter of Discourse shows that pluralism and multiculturalism are to be found within philosophy itself.

Contents: Communities, Contexts and Challenges to Discourse Theory: The fact of pluralism and the multicultural quest for community; Which person? Whose community? On the controversy between liberalism and communitarianism. Plurality and Cognitivism in Light of Anglo American Pragmatism: Pluralism and universalism in discourse ethics; Are moral concerns irreducible to ethical concerns? Habermas and the cognitive content of morality. The Postmodern Discourse on the Other in the French Context: Lyotard’s conception of conflicting claims to validity and its insufficient Kantianism; The limits of solidarity. Discourse ethics, Levinas, and the moral point of view. The Concrete Other as Subject in Feminist Perspective: Toward a model of self-identity: Habermas and Kristeva; Subjectivity in process: Kristeva, discourse theory, and the trials of psychoanalysis. Liberation, Globalization and the Latin American Context: Discourse and liberation: the claims and contexts of two types of universalistic ethics; Modernity and postmodernity as challenges to discourse ethics. An ethics of planetary co-responsibility in an age of suspect foundationalism and rhetorical relativism; Index.