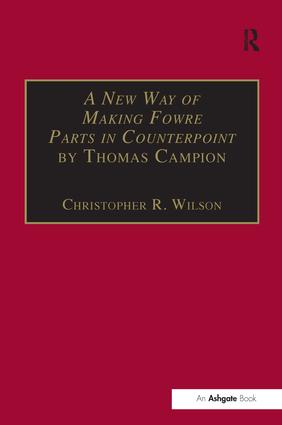 and Rules how to Compose by Giovanni Coprario, 1st Edition

Regarded as one of the most important English music treatises in the seventeenth century, Thomas Campion's A New Way of Making Fowre Parts in Counterpoint reveals progressive ideas about the latent theory of inversions, the fundamental bass, cadences and tonality, and the major-minor octave scale. In this first accurate modern edition of Campion's treatise, Christopher Wilson provides a fully annotated text and a substantial introduction which highlights the historical significance of 'A New Way…' both in its close relationship with Coprario's 'Rules how to Compose' (which is included as an appendix together with commentary and notes) and its unusual debt to German rather than Italian music theory. Wilson presents a persuasive case for viewing the treatise as essentially a very early modern harmony tutor.and its unusual debt to German rather than Italian music theory.

'This is a valuable publication; it is good to have the content of the two treatises available in such an accessible form, while the interpretative and background material not only illuminates the treatises, but also places their content in a fairly wide historical context, particularly in relation to 16th- and 17th-century musical theory.' The Consort 'Wilson's volume is without doubt a most welcome transcription of two treatises whose importance has yet to be completely realized… Wilson's volume will surely prompt a reconsideration of the place of England, abstract instrumental music, and other genres in our interpretation of the early Baroque.' Music and Letters

Contents: Series editor's preface; Preface; Introduction: Background to Campion; Date of treatise; Campion and Coprario; Campion's treatise after 1620; Campion and Renaissance theory; Campion's preface on the 'Scale'; Campion's harmonic thinking; Campion and Calvisius; Editorial note: A new Way of Making Fowre Parts in Counterpoint: The preface; Of counterpoint; Of the tones of musicke; Of the taking of all concords, perfect and imperfect; Of the lesser or imperfect third; Of the greater or perfect third; Of the lesser sixt; Of the greater sixt; Giovanni Coprario, Rules how to compose; Appendix; Bibliography; Index.

The purpose of this series is to provide critical editions of music theory in Britain (primarily England, but Scotland, Ireland and Wales also) from 1500 to 1700. By 'theory' is meant all sorts of writing about music, from textbooks aimed at the beginner to treatises written for a more sophisticated audience. These foundational texts have immense value in revealing attitudes, ways of thinking and even vocabulary crucial for understanding and analysing music. They reveal beliefs about the power of music, its function in society and its role in education, and they furnish valuable information about performance practice and about the context of performance. They are a window into musical culture every bit as important as the music itself.

The editions in this series present the text in its original form. That is, they retain original spelling, capitalization and punctuation, as well as certain salient features of the type, for example, the choice of font. A textual commentary in each volume offers an explication of difficult or unfamiliar terminology as well as suggested corrections of printing errors; the introduction situates the work and its author in a larger historical context.