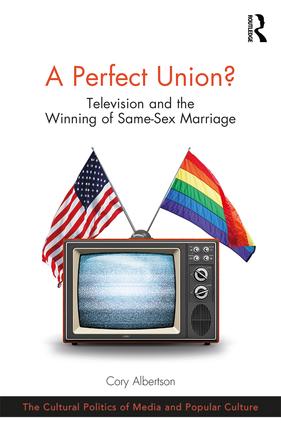 Television and the Winning of Same-Sex Marriage, 1st Edition

On June 26, 2015, Supreme Court Justice Anthony Kennedy declared same-sex marriage "is so ordered" across the United States. The day will no doubt be remembered as a landmark shift in how U.S. society views and validates marriage and romantic relationships. But the shift would not have happened without an arguably more important, but already forgotten, shift four years earlier that saw unprecedented movement in public attitudes alongside record amounts of television representation of LGBQ relationships. Situated at this intersection of legislative, attitudinal and representational change, A Perfect Union? presents analyses of popular programmes such as Modern Family, Grey’s Anatomy, The Good Wife, Glee, Desperate Housewives and House in order to tackle crucial ethical questions regarding the impact of heterosexual knowledges on the rendering of same-sex relationships as relatable and "respectable" – portraits of heteronormativity that reproduce the masculine/feminine binary, monogamous coupledom and the raising of children. Focusing on the connection between heteronormativity and government legitimacy, Cory Albertson deftly examines television’s privileging of certain forms of relationships over others, shedding light on the reproduction of everyday power relations within LGBQ relationships that hinge on issues of race, sexuality, class and gender. An engaging study of media constructions of same-sex relationships and the shaping of public expectations and attitudes, A Perfect Union? is a must-read for scholars of sociology, media and cultural studies and popular culture with interests in gender, sexuality and the family.

"A Perfect Union? is a timely intervention on a subject that continues to be relevant to scholarly discussions today. I can’t express how valuable the concept of a "societal surrogate" could be to communication theory and media studies generally. Most importantly, Albertson integrates personal narratives with scholarly research prose with sophistication and élan."

"A Perfect Union? draws our attention to the powerful but unexamined event that happened before the legalization of same-sex marriage: the spike in television representation of lesbian and gay relationships as romantic, admirable, misunderstood, and worthy of government recognition. Through a compelling study of the cultural campaign to convince straight audiences of the legitimacy of same-sex relationships, Albertson’s book articulates the ambivalence that many queers feel about "gay marriage" and the discourses that circulate around it. We want self-determination—in our relationships and elsewhere—but can queer culture survive the representational compromises that get us there?"

1. "I Want That:" The Marriage of Government and Heteronormativity

2. "It Gets Better:" The Marriage of Identity and In/Stability

4. "Give Me Sensual, Give Me Sultry:" The Marriage of the Male Gaze and Same-Sex Relationships

5. "A Little Bit of Me in that Princess Castle:" The Birthing of Heteronormativity

Cory Albertson is Visiting Lecturer in the Department of Sociology at Smith College, USA.