A Political Economy of Contemporary Capitalism and its Crisis
Demystifying Finance 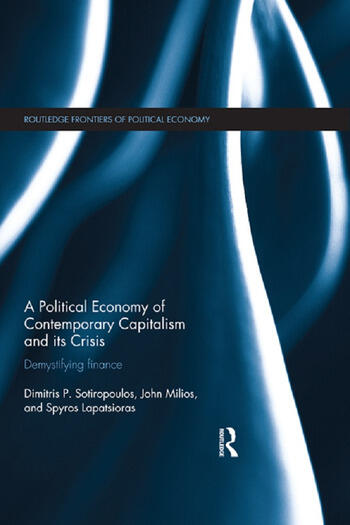 A Political Economy of Contemporary Capitalism and its Crisis: Demystifying Finance

The recent financial meltdown and the resulting global recession have rekindled debates regarding the nature of contemporary capitalism.

This book analyses the ongoing financialization of the economy as a development within capitalism, and explores the ways in which it has changed the organization of capitalist power. The authors offer an interpretation of the role of the financial sphere which displays a striking contrast to the majority of contemporary heterodox approaches. Their interpretation stresses the crucial role of financial derivatives in the contemporary organization of capitalist power relations, arguing that the process of financialization is in fact entirely unthinkable in the absence of derivatives.

The book also uses Marx’s concepts and some of the arguments developed in the framework of the historic Marxist controversies on economic crises in order to gain an insight into the modern neoliberal form of capitalism and the recent financial crisis. Employing a series of international case studies, this book will be essential reading for all those with an interest in the financial crisis, and all those seeking to comprehend the workings of capitalism.

Introduction  Part I: The Long Tradition of Finance as a Counter-Productive Activity in Heterodox Thinking: A Marxian appraisal  1. The Parasitic Absentee Owner in the Keynes-Veblen-Proudhon Tradition  2. Ricardian Marxism and Finance as Unproductive Activity  3. Is Finance Productive or ‘Parasitic’?  Part II: Financial Innovation, Money and Capitalist Exploitation: A short detour in the history of economic ideas  4. Derivatives as Money? A short detour in the history of economic ideas  5. Finance, Discipline and Social Behavior: Tracing the terms of a problem that was never properly stated  Part III: Rethinking Finance: A Marxian analytical framework  6. Episodes in Finance  7. Fictitious Capital and Finance: An introduction to Marx’s analysis (in the third volume of Capital)  8. Financialization as a Technology of Power: Incorporating risk into the Marxian framework  Part IV: The Crisis of the Euro Area  9. Towards a Political Economy of Monetary Unions: Revisiting the crisis of the Euro area  10. European Governance and its Contradictions  Conclusions

John Milios is Professor of Political Economy and History of Economic Thought at the National Technical University of Athens, Greece.

Spyros Lapatsioras is Lecturer of the History of Economic Thought at the University of Crete, Greece.

'Since the great financial debacle of 2008 a blizzard of analyses has buried critical understanding beneath drifts of moral righteousness and pleas for regulatory rescue. This book clears a crucial path toward a comprehensive framework. It provides an incisive mapping of the conceptual foundations for the prevailing heterodox approaches that treat finance as merely parasitical rent. It also advances a radical Marxist understanding of the intrinsic role that finance plays in contemporary capitalism. Sotiropoulos, Milios and Lapatsioras plow a technically nuanced opening to the deeper significance of derivatives as a form of abstract risk that embodies productive social relations. As storms continue to gather on the horizon, you'll want to have this book with you.' — Randy Martin, Chair and Professor of Department of Arts and Public Policy, Tisch School of the Arts, New York University

'Sotiropoulos, Milios and Lapatsioras have undertaken the ambitious task to rethink and revitalize Marx’s ideas on finance and use them to decipher the nature of contemporary capitalism and the crisis emerging from it. Their argument is important and provocative, the fruit of long years of involvement in research and political activism. Their major achievement is to have constructed a unique and distinctive interdisciplinary analysis – a real analytical contribution – in the burgeoning contemporary literature on that subject. Their study is both theoretically profound and politically compelling, and especially relevant in the present critical period.' — Alexis Tsipras, Head of SYRIZA and Leader of the Greek Parliamentary Opposition

'Most ‘Marxist’ analyses of the contemporary crisis suffer from an overly simplified understanding of value and money. By contrast, this study focuses on what distinguishes Marx’s critique of political economy from both classical political economy and modern heterodox approaches: value form analysis and the theory of fetishism. The authors not only use the full theoretical apparatus of all three volumes of Capital (which rarely takes place), but offer exciting theoretical enhancements such as demonstrating the connection between fictitious capital and fetishism. They also show how to make such theoretical innovations fertile for a critical analysis of the Euro crisis. In sum, this is a really thrilling piece of modern Marxist critical analysis.' — Michael Heinrich, University of Applied Sciences, Berlin, Author of An Introduction to the Three Volumes of Karl Marx’s Capital

"Sotiropoulos, Milios, and Lapatsioras employ international examples and use Marxian concepts and arguments to discern the true nature of the modern neoliberal form of capitalism and the recent financial crisis. They analyze the ongoing financialization of the economy as a development within capitalism, and describe the ways in which it has changed the organization of capitalist power. They argue that the process of financialization is "unthinkable" in the absence of derivatives. There are 10 chapters divided into four parts: the long tradition of finance as a counter-productive activity in heterodox thinking: a Marxian appraisal; financial innovation, money, and capitalist exploitation: a short detour in the history of economic ideas; rethinking finance: a Marxian analytical framework; and the crisis of the Euro area. The authors target the educated reader with an interest in the financial crisis seeking to understand the workings of capitalism, as well as scholars and students. There is a list of illustrations, notes, and references." - Book News

"This book has a very important message. In brief the message is that finance is a sociopolitical power relation. It further makes a contribution towards understanding the great financial collapse of 2007-8 in particular, and the contemporary financial system more generally in the context Marxian political economy. It should be applauded for crediting Marx with particular depth concerning monetary phenomena, which often is underappreciated and misunderstood." - Hans G Despain, Marx & Philosophy Review of Books