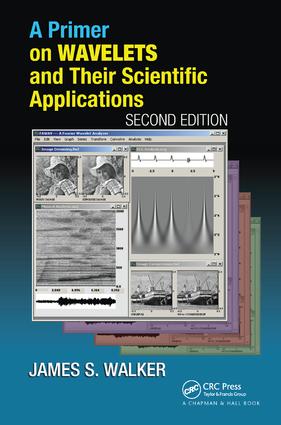 A Primer on Wavelets and Their Scientific Applications

In the first edition of his seminal introduction to wavelets, James S. Walker informed us that the potential applications for wavelets were virtually unlimited. Since that time thousands of published papers have proven him true, while also necessitating the creation of a new edition of his bestselling primer. Updated and fully revised to include the latest developments, this second edition of A Primer on Wavelets and Their Scientific Applications guides readers through the main ideas of wavelet analysis in order to develop a thorough appreciation of wavelet applications.

Ingeniously relying on elementary algebra and just a smidgen of calculus, Professor Walker demonstrates how the underlying ideas behind wavelet analysis can be applied to solve significant problems in audio and image processing, as well in biology and medicine.

Nearly twice as long as the original, this new edition provides

A mini-course on image compression, including a tutorial on arithmetic compression

Concise yet complete coverage of the fundamentals of time-frequency analysis, showcasing its application to audio denoising, and musical theory and synthesis

An introduction to the multiresolution principle, a new mathematical concept in musical theory