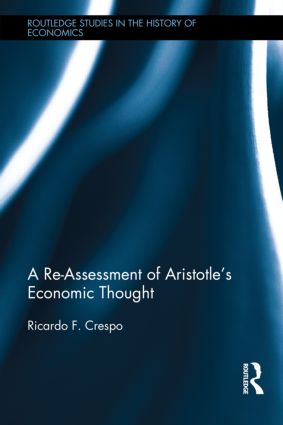 A Re-Assessment of Aristotle’s Economic Thought

The world has seen several financial and economic crises in the past few years. Psychological, ethical and philosophical levels of causal analysis have been discussed, and in this context, an interest in classical thinkers has emerged.

The work of Aristotle has influenced writers from Marx and Menger to Amartya Sen. This book introduces us to Aristotle’s thought on 'the economic' and on its influences on economists. First, it focuses on Aristotle´s ideas, situating Aristotle in his historical context, describing his positions on the economic and analysing what kind of reality the economic is, its relation with ethics and with politics. Then, it determines what kind of science is concerned with the economic. Later, it analyses related topics and shows the influence of Aristotle’s ideas on contemporary economists. It concludes by highlighting the Aristotelian contributions to today’s economy.

This scholarly volume offers important new insights into the Aristotelian approach to the economy itself, as well as to the idea of economics as a science, bringing Aristotle’s views to bear on the modern economy.

"This book packs more of Aristotle's philosophy relating to social science than most other books its size. If fully digested it will provide an excellent framework for dialogue on current economic methodology."

"Crespo’s work is careful, knowledgeable, scholarly, and thoughtprovoking. All interested in the complex relationship between Aristotle’s work and contemporary economic theory and society should read it and contemplate its implications." - Spencer J. Pack, Erasmus Journal for Philosophy and Economics

"Crespo's book offers the student of economics a great deal to think about, a series of analyses that are historically well-founded, and as often happens in diverse attempts to re-evaluate Aristotle, the proposal to widen horizons is beneficial for a discipline in which heterodox perspectives are gaining ground. Many of the fundamental arguments of modern economic science that are usually left implicit are fully explained and assessed here." - Natali Carlo, The European Journal of the History of Economic Thought

Ricardo F. Crespo is Professor of Philosophy of Economics at IAE Business School, Universidad Austral, Argentina. He holds BA degrees in Economics and in Philosophy, as well as a doctorate in Philosophy (Universidad Nacional de Cuyo, Mendoza, Argentina) and a PhD in Economics (Universiteit van Amsterdam). He teaches Philosophy of Economics at IAE Business School and at Universidad Nacional de Cuyo. Professor Crespo is a researcher at Argentina’s National Council of Scientific Research (CONICET) and has published numerous books, articles and papers in his field. His recent publications include articles in the Cambridge Journal of Economics, Journal of Economic Methodology, Foundations of Science, Journal of Applied Economics, Review of Social Economy and Synthese.