A Social History of Twentieth-Century Europe 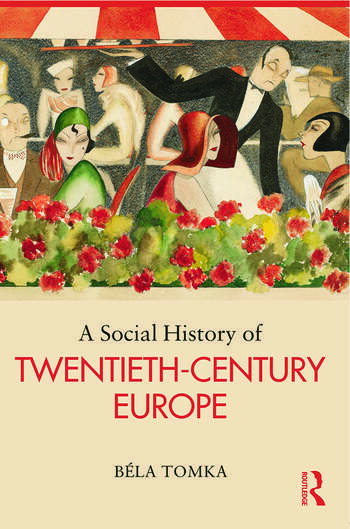 A Social History of Twentieth-Century Europe

A Social History of Twentieth-Century Europe offers a systematic overview on major aspects of social life, including population, family and households, social inequalities and mobility, the welfare state, work, consumption and leisure, social cleavages in politics, urbanization as well as education, religion and culture. It also addresses major debates and diverging interpretations of historical and social research regarding the history of European societies in the past one hundred years.

Organized in ten thematic chapters, this book takes an interdisciplinary approach, making use of the methods and results of not only history, but also sociology, demography, economics and political science. Béla Tomka presents both the diversity and the commonalities of European societies looking not just to Western European countries, but Eastern, Central and Southern European countries as well. A perfect introduction for all students of European history.

Preface. 1. Introduction 2. Population 3. Families and households 4. Social stratification and social mobility 5. The welfare state 6. Work, consumption and leisure 7. Politics and society 8. Urbanization 9. Education, religion and culture 10. Conclusions: the societies of Europe and Europe as a society in the 20th century. Selected bibliography

"Over the years I have seen many studies on the social history of twentieth-century Europe, but this one clearly stands out. Béla Tomka’s is, to my knowledge, the first serious attempt to fully integrate all the continent’s regions, while strongly relying on comparisons. This sophisticated and multifaceted synthesis is a magnum opus which deserves a very wide readership." - Marcel van der Linden, International Institute of Social History, The Netherlands

"Béla Tomka has produced a very convincing and impressive social historical synthesis of Europe between World War I and the present. Eastern Europe is not a mere appendix to a basically West European story, but gets its fair share of attention and erudition. The book is written in a highly reflective spirit with much sense for comparative approaches. On the basis of an excellent knowledge of the research literature in several languages, it offers a very readable and fully reliable introduction into the major fields of present-day social history. At the same time it relates to fundamental questions of European modernity, conflicts and identity, in an original way."  - Jürgen Kocka, Wissenschaftszentrum Berlin für Sozialforschung, Germany

"Tomka is excellent when he considers the theoretical approaches that past scholars have brought to bear. After finishing this book, readers are left with a clear sense of how European society has changed, whether one considers the institutions of Europe or the outlook of its inhabitants. Nationalism and religion have, to a very considerable degree, lost their place, but the future is uncertain as Europe faces issues involving the environment, unemployment, and the place of immigrants in countries that were hitherto homogeneous. Summing Up: Highly recommended." - S. Bailey, emeritus, Knox College, CHOICE

A Social History of Twentieth-Century Europe is a CHOICE Outstanding Academic Title of 2013.

“…Tomka’s is a very useful book because it provides intelligent and up-dated coverage of extremely important topics. It should be within arms-reach of anyone putting lectures together on Europe’s twentieth century.” -Nicholas Doumanis, University of New South Wales, Australia

"Tomka’s project is different and his book is without question remarkably learned and full of useful material. It is a work that would surely have found its way into Hobsbawm’s bibliography."- Mark Gabbert, University of Manitoba