A Sociology of Prayer 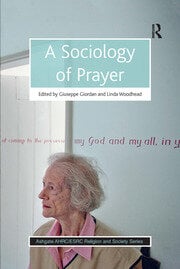 A Sociology of Prayer

Prayer is a central aspect of religion. Even amongst those who have abandoned organized religion levels of prayer remain high. Yet the most basic questions remain unaddressed: What exactly is prayer? How does it vary? Why do people pray and in what situations and settings? Does prayer imply a god, and if so, what sort? A Sociology of Prayer addresses these fundamental questions and opens up important new debates. Drawing from religion, sociology of religion, anthropology, and historical perspectives, the contributors focus on prayer as a social as well as a personal matter and situate prayer in the conditions of complex late modern societies worldwide. Presenting fresh empirical data in relation to original theorising, the volume also examines the material aspects of prayer, including the objects, bodies, symbols, and spaces with which it may be integrally connected.

’An astonishing array of insights about something generally neglected and taken for granted: what are people up to when they pray? The fresh, empirically-based contributions will engage and inform readers. Most importantly, the collection helps move forward the only recently-opened discussion about the sociality and relationality of prayer, a practice that persists within and on the borders of the sacred and the secular.’ Abby Day, Goldsmiths, University of London, UK ’Insightfully, in her conclusion, Linda Woodhead considers prayer as changing the subject. The chapters brought together in this book help us to understand why. Each of them makes a distinctive contribution to a topic that is insufficiently understood by sociologists.’ Grace Davie, University of Exeter, UK ’For those living within western cultures, prayer remains one of the most perplexing of religious phenomena. This collection of essays approaches prayer as a social fact, as patterns of behaviour that confer meaning within the lives of individuals and communities across the globe. It takes seriously the ways in which acts of prayer are shaped by their social context, and as such, challenges the assumption that prayer is always individual and self-serving, instead highlighting its social consequences, such as the cultivation of relationships and civic responsibility, and the reinforcement of community boundaries. These essays are international in scope, and offer an important contribution to the international sociology of religion. Those who want to understand better why prayer endures as a social phenomenon would do well to engage seriously with this book.’ Mathew Guest, University of Durham, UK