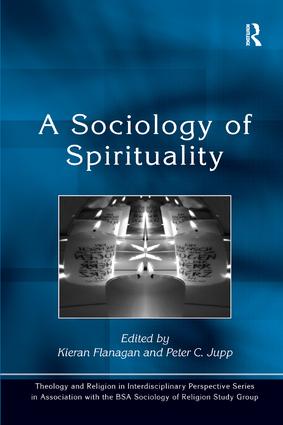 A Sociology of Spirituality

The emergence of spirituality in contemporary culture in holistic forms suggests that organised religions have failed. This thesis is explored and disputed in this book in ways that mark important critical divisions. This is the first collection of essays to assess the significance of spirituality in the sociology of religion. The authors explore the relationship of spirituality to the visual, individualism, gender, identity politics, education and cultural capital. The relationship between secularisation and spirituality is examined and consideration is given to the significance of Simmel in relation to a sociology of spirituality. Problems of defining spirituality are debated with reference to its expression in the UK, the USA, France and Holland. This timely, original and well structured volume provides undergraduates, postgraduates and researchers with a scholarly appraisal of a phenomenon that can only increase in sociological significance.

’… a step forward in our understanding of some key features of contemporary culture.’ Church Times ’… these are first-rate, detailed essays that move the spirituality debate forward from simplistic oppositions between the individual and community, public and private, religious and the spiritual, and signify an ascending and important topic within the sociology of religion.’ Religious Studies Review ’… a very rich and useful collection on the nature of spirituality.’ Journal of Contemporary Religion ’This book does an excellent job of bringing to light, through interesting case studies and theoretical essays, some of the key issues in what promises to be a growing theme in the sociology of religion.’ British Journal of Sociology ’A Sociology of Spirituality is a robust contribution to the analysis of contemporary religion and culture trends. The volume is well structured and skillfully illustrates the diversity of sociological approaches to spirituality.’ Worship ’A Sociology of Spirituality is an important book for those interested in studies of the contemporary religious landscape.’ Alternative Spirituality and Religion Review 'What is particularly fascinating, and gratifying, is that this is the first substantial collection of scholarly work to explore the meaning and significance of 'spirituality' in relation to the method and preoccupations of sociology. … the book undoubtedly broadened my own perspectives and reminded me forcefully that it is all too easy to treat spirituality in a pure, rather timeless or abstract way. While spiritual traditions are not purely cultural constructs, our understanding of them cannot be detached from the surrounding cultures within which they inescapably came to birth and in relation to which traditions persistently adapt and develop. I look forward to an increasing and mutually fruitful dialogue between sociologists and scholars of Christian spirituality.' Spiritus '… very much of int