A Sourcebook of Early Modern European History
Life, Death, and Everything in Between 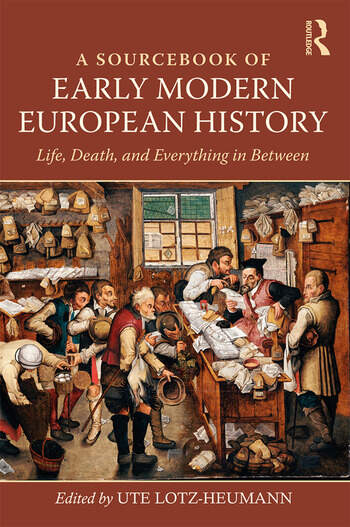 A Sourcebook of Early Modern European History: Life, Death, and Everything in Between

A Sourcebook of Early Modern European History not only provides instructors with primary sources of a manageable length and translated into English, it also offers students a concise explanation of their context and meaning.

By covering different areas of early modern life through the lens of contemporaries’ experiences, this book serves as an introduction to the early modern European world in a way that a narrative history of the period cannot. It is divided into six subject areas, each comprising between twelve and fourteen explicated sources: I. The fabric of communities: Social interaction and social control; II. Social spaces: Experiencing and negotiating encounters; III. Propriety, legitimacy, fi delity: Gender, marriage, and the family; IV. Expressions of faith: Offi cial and popular religion; V. Realms intertwined: Religion and politics; and, VI. Defining the religious other: Identities and conflicts.

Spanning the period from c. 1450 to c. 1750 and including primary sources from across early modern Europe, from Spain to Transylvania, Italy to Iceland, and the European colonies, this book provides an excellent sense of the diversity and complexity of human experience during this time whilst drawing attention to key themes and events of the period. It is ideal for students of early modern history, and of early modern Europe in particular.

How to use this book

I. The fabric of communities: Social interaction and social control

1. Show me your horse and I will tell you who you are: Marx Fugger on horses as markers of social status, 1584

2. From Bohemia to Spain and back again: Sports diplomacy in fifteenth-century Europe

4. "And so the old world has renewed": Magdalena Paumgartner of Nuremberg reveals the social significance of fashion, 1591

5. In and out of the ivory tower: The scholar Conrad Pellikan starts a new life in Zurich in 1526

6. A Protestant pastor should set an example for his community: Johannes Brandmüller of Basel gets into trouble in 1591

8. Canterbury, 1560: Slander and social order in an early modern town

9. ‘Popular duels’: Honor, violence, and reconciliation in an Augsburg street fight in 1642

By B. Ann Tlusty

12. Against corruption in all the estates: An early eighteenth-century Pietist vision for universal reform through education

13. Life at a German court: The importance of equestrian skill in the early seventeenth century 65

14. The constitutional treaty of a German city: Strasbourg, 1482

18. Bourges: Public rituals of collective and personal identity in the middle of the sixteenth century

By Jonathan A. Reid

By Barbara B. Diefendorf

20. Swiss towns put on a play: Urban space as stage in the sixteenth century

22. Bologna’s Feast of the Roast Pig: A carnivalesque festival in a sixteenth-century Italian city square

By Katherine G. Brady and Thomas A. Brady, Jr.

25. Mapping the unseen: A Bohemian Jesuit meets the Palaos Islanders, 1697

26. Housefather and housemother: Order and hierarchy in the early modern family

27. Sexual crime and political conflict: An Alsatian nobleman is burned to death with his male lover in 1482

29. Hans Gallmeyer: Seduction, bigamy, and forgery in an Augsburg workshop in 1565

31. Gender relations in Germany during the Thirty Years’ War: A groom refuses to marry his bride

34. A letter sent from Augsburg in 1538: A Protestant minister writes to a friend about his illegitimate son

35. Piedmont, 1712: Son forced into monastery by his father manages to get out

36. A mother tries to reform her son: Elisabeth of Braunschweig’s "Motherly Admonition" to her son Erich, 1545

By Lynn A. Botelho

41. Interpreting the Bible in the sixteenth century: John Calvin on the Gospels of Luke and Matthew

42. How to organize a church: John a Lasco on the election of ministers, 1555

44. A funeral sermon for Christian Röhrscheidt, law student in Leipzig, 1627

By Kathryn A. Edwards

48. A snapshot of Iberian religiosities: The inquisitorial case against the New Christian Mar í a de Sierra, 1651

51. Loftur the Sorcerer and clerical magic in eighteenth-century Iceland

By Thomas B. De Mayo

52. Martin Luther defies Frederick the Wise: A letter from Borna, 1522

54. The courage to avow the truth: Philip Melanchthon on the Interim, 1548

57. Reformation mandates for the Pays de Vaud, 1536: How Bernese authorities tried to force their subjects to become Protestants

58. Ministers and magistrates: The excommunication debate in Lausanne in 1558

59. Who is in charge? Politics, religion, and astrology during the Thirty Years’ War

By Raymond A. Mentzer

64. Is the throne empty? James II’s supposed desertion of 1688 discussed

65. Dubrovnik: A Catholic state under the Ottoman sultan

VI. Defining the religious other: Identities and conflicts

66. The ‘red Jews’ and Protestant reformers

70. Should you consecrate bells? Johannes Eberlin von Günzburg argues against an established religious practice in 1525

71. Catholic preaching on the eve of the French Wars of Religion: A eucharistic battleground

72. How to convince Catholics that Protestants have sex in the open air: Gabriel du Pr é au’s Catalogue of All Heretics, 1569

73. The Luther family’s flight: A Counter- Reformation polemical broadsheet of the 1620s

74. God intervenes: A eucharistic miracle in the principality of Orange, 1678

76. "A priest you were on Sunday / Monday morning a minister": Clerical conformity in eighteenth- century Ireland

77. A great poet describes his own times: John Milton’s Of Reformation, 1641

78. Thomas Gage in Guatemala: A Puritan’s memoir of preaching among the Maya, 1648

79. The morality of doubt: The religious skeptics of seventeenth-century Venice