A Southern Criminology of Violence, Youth and Policing
Governing Insecurity in Urban Brazil 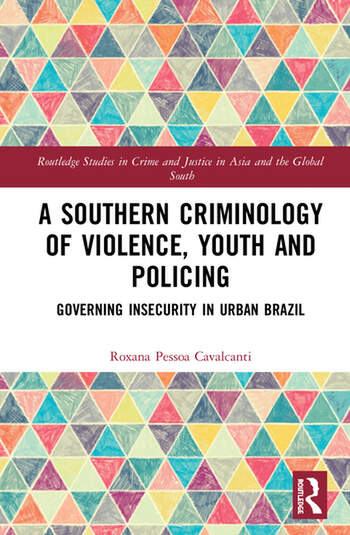 A Southern Criminology of Violence, Youth and Policing: Governing Insecurity in Urban Brazil

A Southern Criminology of Violence, Youth and Policing examines public experiences of insecurity and the social impacts of security programmes that aim to address violence in Brazil. This book contributes to the emerging field of southern criminology by engaging with the perils faced by people living in ‘favelas’ in Brazil and critically investigating the discourse of state actors. It combines original ethnographic data with critical analysis to expand understandings of violence and control in urban and postcolonial contexts.

This study challenges dominant practices and notions of security and control. Its objective is to decolonise knowledge and shed light on issues relating to policing, coercion, and the great socioeconomic, historical and spatial inequalities that shape the lives of millions of people in the Global South. The findings of this book expose the exacerbation of social problems by the expansion of the penal and crime industry, unsettling the applicability and universalism of mainstream managerial criminology.

The evidence reveals that new modes of securitisation have not addressed long-standing issues of sexism, racism, classism and brutalisation in the police. Moreover, through the increasing use of methods of control and incarceration, security programmes have failed to prevent diverse forms of violence and challenge the expansion of organised crime. Instead they have exacerbated the inequalities that affect the most marginalised populations.

Written in a clear and direct style, this book will appeal to students and scholars in criminology, sociology, cultural studies, social theory and those interested in learning about the social injustices that exists in the Global South.

Chapter 1: Over, under and through the walls

Chapter 6: Life, crack and violence in the favelas

Chapter 7: Policy and Practice: What is to be done?

Roxana Pessoa Cavalcanti is a lecturer in criminology at the University of Brighton. She conducts critical research about violence, policing and insecurity. Her previous work has focused on theorising social inequalities relating to class, gender and ethnicity in the context of Brazil, the politics of control, critical theory, justice and human rights.

"In this timely book, Roxana Cavalcanti explores the impact of public security policies on two different poor neighborhoods of Recife in the northeastern state of Pernambuco in Brazil. Based on painstaking research in a city the author knows well, the book captures the voices of residents of these communities, and especially those of young people, and analyzes the limitations of mainstream managerial approaches to crime and violence. The book's arguments in favor of more democratic and transparent approaches to public security are nuanced, well-reasoned, and a refreshing alternative to contemporary calls for more violent policing in Brazil. This book deserves a broad readership." Anthony Pereira, Director, Brazil Institute, King's College London.

"Global police studies has been enriched by this careful study of Brazilian policing which provides a worrying indicator of the trend towards transnational insecurity. This book sheds much needed light onto the politics of policing in the Global South." James Sheptycki, McLaughlin College, York University, Toronto, Canada

"Cavalcanti’s book is a splendid addition to a growing literature drawing attention to policing’s often ‘darker’ southern aspects, where the legacies of post-colonialism or military dictatorship still cast their shadows. As the book compellingly demonstrates, in such contexts, policing often faces far greater threats and challenges, while police reform is itself so much harder to secure." Peter Squires, Emeritus Professor of Criminology and Public Policy, University of Brighton

"A first class empirical study of policing and securitisation policies in Brazil. Cavalcanti establishes the themes of ‘southern’ criminology and social science in the distinct trajectories of the global south from colonialism and military dictatorship to neoliberal security, by contrast to the ‘northern’ experience of neoliberalism as the weakening of the welfare state. She shows how the southern experience, reflected in Brazil, makes for an altogether harsher, more militarised and violent neoliberalism. High levels of violence and social polarisation combine with traditions of militarised policing to render popular northern crime control models such as situational crime prevention prone to exacerbate rather than ameliorate the marginalisation of poor communities. This book should also be read as a caution against complacent assumptions regarding possible futures for the global north." John Lea, Visiting Professor of Criminology, Goldsmiths, University of London.

"This book brilliantly presents an analysis of the rise of violence in Brazil in the last decades and empirically evaluates the changing discourses and practices in crime control policies in marginalized areas of large urban cities. A must read for criminologists worldwide interested in both the rise of crime and criminalization in the Southern Hemisphere." Mauricio Dieter, Professor of Criminology and Criminal Law, University of São Paulo