A Test of Faith?
Religious Diversity and Accommodation in the European Workplace 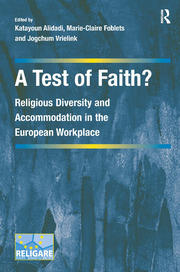 A Test of Faith?: Religious Diversity and Accommodation in the European Workplace

Issues of religious diversity in the workplace have become very topical and have been raised before domestic courts and the European Court of Human Rights. Examining the controversial and constantly evolving position of religion in the workplace, this collection brings together chapters by legal and social science scholars and provides a wealth of information on legal responses across Europe, Turkey and the United States to conflicts between professional and religious obligations involving employees and employers. The contributors examine how case law from the European Court of Human Rights, domestic experiences and comparative analyses can indicate trends and reveal established and innovative approaches. This multi-perspective volume will be relevant for legal practitioners, researchers, academics and policy-makers interested in human rights law, discrimination law, labour law and the intersection of law and religion.

Contents: Introduction, Katayoun Alidadi, Marie-Claire Foblets and Jogchum Vrielink; Part I European Components of the Religion and Workplace Debate: Religious interests in the European workplace: different perspectives, Lucy Vickers; Section I Religion, Workplace Accommodations and the Case Law of the European Court of Human Rights: Religious accommodation in the workplace: improving the legal reasoning of the European Court of Human Rights, SaÃ¯la Ouald Chaib; A critical appraisal of the margin of appreciation left to states pertaining to 'church-state relations' under the jurisprudence of the European Court of Human Rights, Kristin Henrard; Beyond Lautsi: an alternative approach to limiting the government's ability to display religious symbols in the public workplace, Hans-Martien ten Napel. Section II New Player Joining In: the European Union and Religious Discrimination: Accommodation of religion and sex equality in the workplace under the EU equality directives: a double bind for the European Court of Justice, Titia Loenen; Silence is golden? Charting the intersections of speech and direct discrimination under EU law with a special focus on racial and religious discrimination in recruitment, Jogchum Vrielink; Religious-ethos employers and other expressive employers under European and Belgian employment law, Yves Stox. Part II Identity, Neutrality, Secularism: Case Studies and Comparative Perspectives: Section I Country Studies: Turkey, France and Belgium: Religion in the public and private Turkish workplace: the approach of the Turkish judiciary, Mine Yildrim; The practice of religion in the French public and private workplace: in search of an elusive balance, Rim-Sarah Alouane; Jewish women in the Belgian workplace: an anthropological perspective, Efrat Tzadik. Section II Comparative Perspectives In the Public and Private Workplace: Muslim women made redundant: unintended signals in Belgian and Dutch case law on religious dress in private sector employment an

Katayoun Alidadi is a PhD researcher at the Catholic University of Leuven, Belgium and project researcher for RELIGARE. Marie-Claire Foblets, Lic. Iur., Lic. Phil., Ph.D. Anthrop. (Belgium) is professor of Law and of Anthropology at the Universities of Leuven (Louvain) and Antwerp. She has held various visiting professorships both within and outside Europe. For several years she served as Head of the Department of Social and Cultural Anthropology at the Catholic University of Leuven. She currently chairs the Institute for Migration Law and Legal Anthropology at the Law Faculty in Leuven. She has conducted extensive research and published widely on issues of migration law, including the elaboration of European migration law after the Treaty of Amsterdam, citizenship/nationality laws, compulsory integration, anti-racism and non-discrimination, etc. In the field of anthropology of law, her research focuses on cultural diversity and legal practice, with a particular interest in the application of Islamic family laws in Europe, and more recently in the accommodation of cultural and religious diversity under State law. Jogchum Vrielink is Post-Doctoral researcher at the Catholic University of Leuven, Belgium and project manager for RELIGARE.

''...the book is worthwhile reading and an original source of information and analysis of the relevant legal, political and anthropological implications of an issue that Europe, as political and legal entity, and its Member States cannot defer to tackle.’ Religion and Human Rights Religion and modernity meet in the European workplace. The implications are many and varied. The contributions to this timely volume are concerned with the legal dimensions of these encounters. They merit very careful scrutiny.' Grace Davie, University of Exeter, UK ’Throughout Europe, religion in the workplace is perceived as self-evident in some contexts, and as hugely problematic in others. The increasing number of legal scholars and practitioners who confront this issue will find in this book numerous pathways along which to form their own legal opinion, and to help shape the as yet undecided legal approaches in many European countries.’ Eva Brems, Ghent University, Belgium